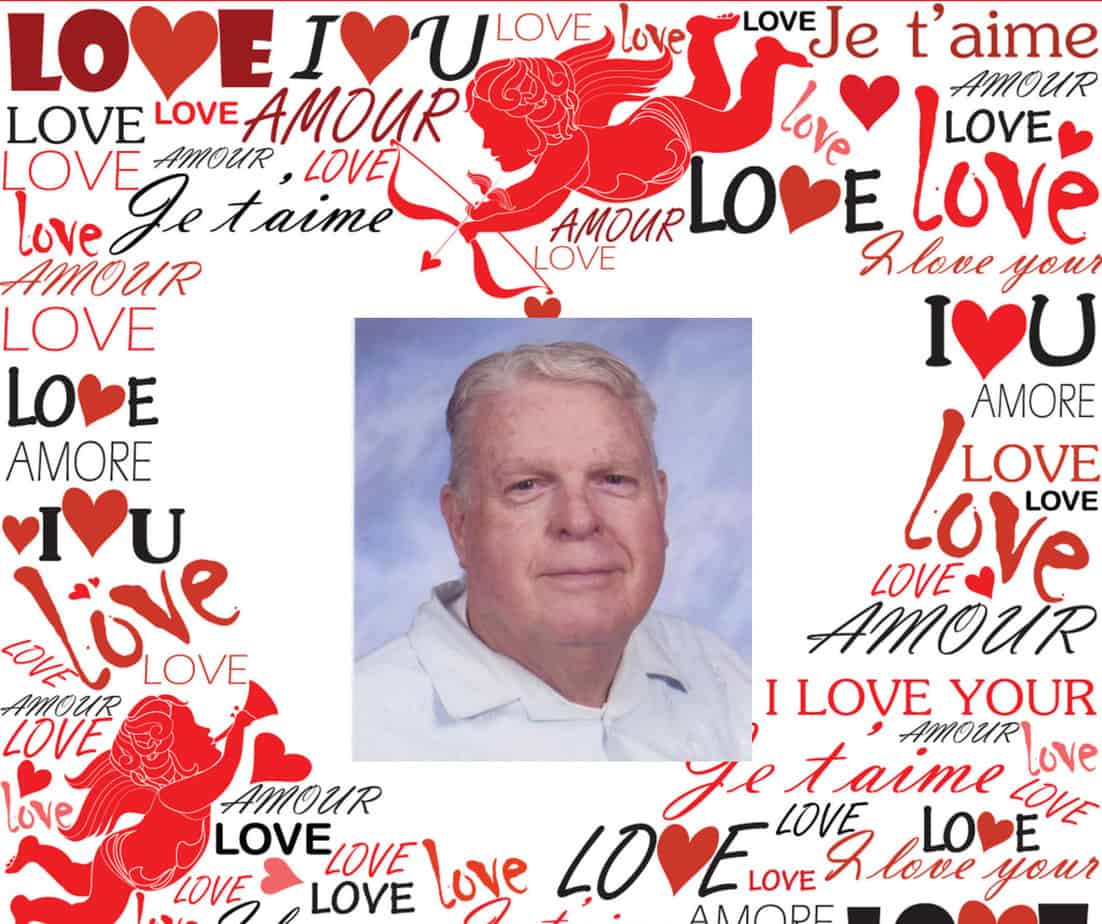 Today is Valentine’s Day, and husbands and wives, boyfriends and girlfriends are showing their love for each other in special ways. He may bring flowers or candy; she may cook an elaborate or favorite meal; they may treat themselves to a special outing—a party or dinner at a fine restaurant.

My favorite Valentine’s Day with my husband Jack didn’t include any of those traditional observances. Twenty-four days earlier, on January 22, 1992, I went to the chiropractor for a manipulation and had to be carried out after experiencing a devastating stroke. I spent a week in the hospital and a month in an in-patient rehabilitation facility. If you do the math, you will realize that I was in the rehabilitation hospital on Valentine’s Day. As usual, I spent the day in therapy: hours of physical therapy and occupational therapy, relieved at the end of the day by an hour of recreational therapy.

That day, my occupational therapy was different from the usual exercise routines. I spent the time in the facility’s fully functional kitchen. I wasn’t able to go shopping for the ingredients, but I made a grocery list and the therapist brought in everything I requested. I cooked a pot roast with vegetables in the Crockpot. I chopped the vegetables, seasoned the meat, assembled the one-dish meal in the cooker, and set it to cook while I went to my other therapy sessions. That sounds very easy, and it always had been the many times I had cooked this before. I liked to make that dish because I could start it before I left for work, and it would be ready when I got home. Besides that, it was one of Jack’s favorite meals. However, it’s not as easy to make from a wheelchair with seasonings and utensils out of reach and with my dominant arm and hand not fully useful after being totally paralyzed. Preparing this simple dish took three times or more as long as usual.

At the end of my therapy that Valentine’s Day, I changed into my prettiest workout outfit, the only clothes I could dress myself in, went to the kitchen, and turned off the Crockpot. The roast was perfectly tender, and the vegetables were perfect. With the help of a long reacher/grabber tool, I got plastic dishes out of the cabinet and set the small table. I brewed tea and filled tall glasses, leaving room for ice. Then I returned to my room to wait for Jack.

When he arrived, he expected me to wheel my way to the dining room with him. Typically, patients were served meals in our rooms, but Jack had arranged for my meals to be delivered to the dining room. He went through the serving line to buy his meal, then we ate together.

This evening, however, I led him to the kitchen in the therapy department. Jack was confused, but he followed me until we arrived at the tiny kitchen. He saw the two place settings and the Crockpot, and he realized what was going on. I added ice to the tea glasses and served us each meat and vegetables from the slow cooker. I’m sure I spilled on the table, but all I remember is how proud I was for cooking this special meal and how excited and proud Jack was to see my improvement. He raved about the meal as if it were the best meal I had ever served him, and he ignored the clumsy accidents.

Through our forty-five years of marriage, we had a number of romantic Valentine’s dates to outstanding restaurants, but nothing ever tasted as good as that simple pot roast. I never felt more love than my husband showed me sharing that simple meal in the tiny kitchen in a rehab hospital. We were blessed that I was recovering and that we would have more years together. We were thankful that we loved each other as much as ever even though I was in a wheelchair and had a lot of deficits. We were delighted that we could still share ordinary moments and activities with joy.

Throughout my rehabilitation, which continued with many months of outpatient therapy and home exercises, Jack devoted himself to my care. He was thirteen and a half years older than me, and before we were married, the priest who did our premarital counseling talked a lot about our age difference. He asked me if I was willing to take care of an old man at the end of his life. I assured the priest I was ready for that responsibility, as whatever time Jack and I had together would be worth it. In fact, I did care for him at the end of his life and consider it a blessing. However, long before that, he cared for me during my stroke recovery.

Jack had an amazing ability to understand what I could and couldn’t do. If I asked him to do something for me that he thought I was capable of doing on my own, he gently refused to help me until I had tried doing it myself. Sometimes I would complain that it was hard, but he didn’t accept that excuse. If I tried and really could not do whatever it was, Jack would do it for me, but only after he was convinced that I had sincerely tried. I believe that I accomplished much more because of Jack’s insistence that I try. If he had done things for me that I didn’t want to do because they were hard, I would not have re-learned to do many of them or I would not have regained the strength and ability needed for the task.

Valentine’s Day is a good day to enjoy special gifts and treats and activities. But wearing a plain jogging suit and sharing an ordinary meal served directly from a slow cooker can be just as romantic. Love is all you need for a perfect Valentine’s Day.