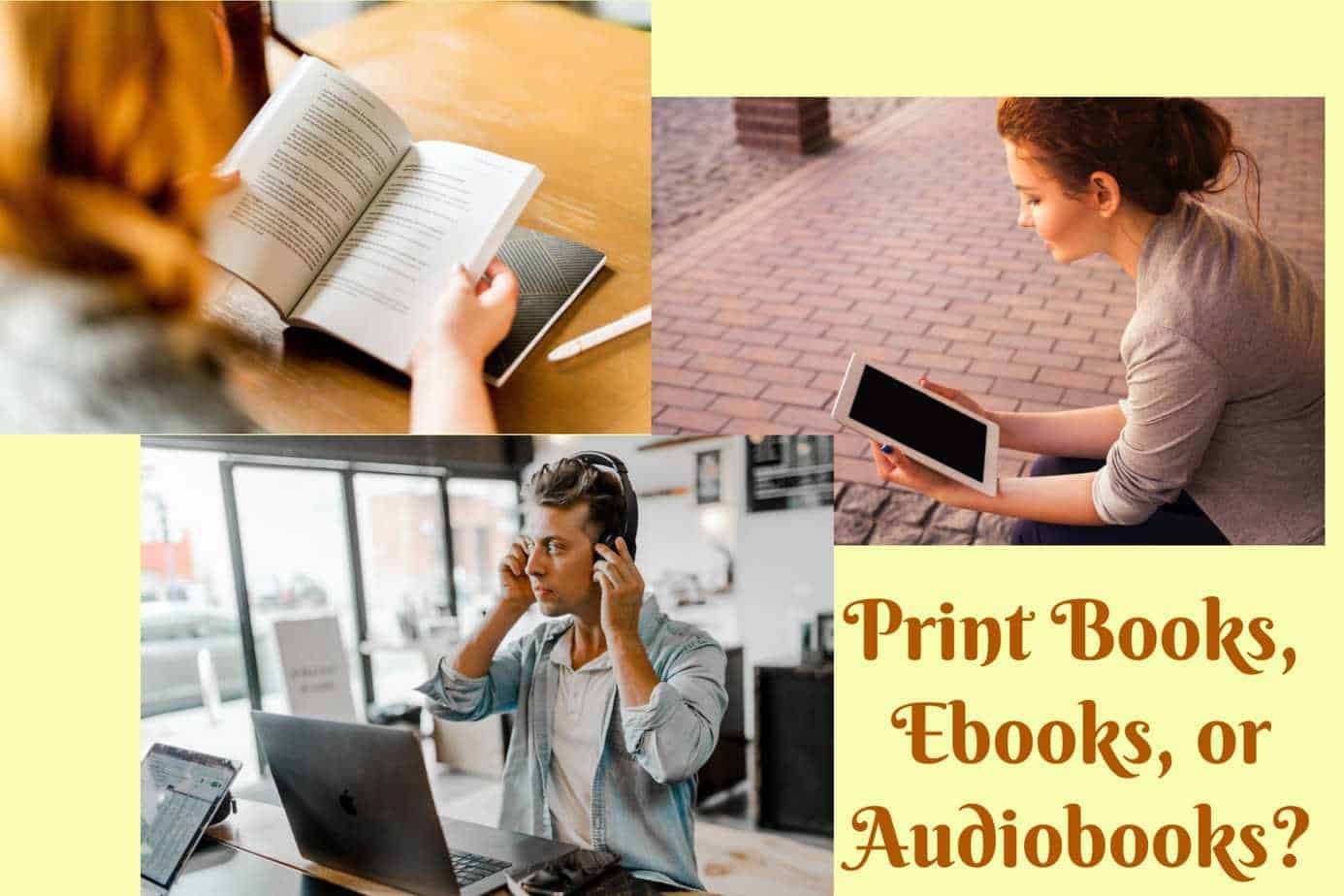 Like most readers, I’ve always loved books. And for many years, books were print books. I began reading at an early age, and I remember my mother complaining that I didn’t answer her when she called because I always had my “nose buried in a book.”

I’ve often thought that if I were rich, the largest and most impressive room in my house would be a beautiful library filled with leather-bound first editions.

Then at age forty-five, I had a stroke. Damage to my optic nerve gave me blurry, double vision, and paralysis on my right side made holding a book almost impossible. In spite of my suspicion that I wouldn’t enjoy listening as much as I enjoyed reading, audiobooks made it possible for me to “read” lying in bed. In the early 90s, audiobooks were on cassette tapes, and the selection of titles was relatively small. However, I was happy to have audiobooks available from the library and the bookstore.

After several months, I recovered sufficiently to be able to read print books again, and I gave up audiobooks. By that time, I had read most of the ones I could get my hands on, anyway.

Then a few years later, when I became a writer, I wrote a romance novel about a heroine who experienced a stroke similar to the one I had. Stroke of Luck was not accepted by print publishers; I was told repeatedly that romance novels couldn’t have handicapped characters. An ebook publisher liked my book and was willing to publish something outside the ordinary parameters of the genre. So I became an advocate of ebooks and traveled around Texas and Oklahoma with a group of fellow authors to do booksignings, most of which consisted of telling people about ebooks and showing off our Rocket eBook readers, to the best of my knowledge, the first ebook reader, almost a decade before the Kindle came along.

Having a novel published electronically introduced me to ebooks, but I soon came to love them for other reasons. My vision is poor, and I can set the font large enough to read easily. It’s actually easier for me to hold my Kindle than to hold a paperback book. It’s wonderful to be able to carry hundreds of books in the palm of my hand and know that when I finish one book, I have a huge selection to begin the next book right away.

However, a few months ago, I developed a shoulder problem that limits the use of my arm. It became harder to hold an ereader. I saw an ad for some free audiobooks and remembered how much I had enjoyed audiobooks when I was recovering from the stroke, so I decided to give them a try. No more shoulder/arm problem holding anything—I just start the audiobook and set the phone down. I can listen in bed before I fall asleep; I can listen while I’m eating or doing something with my hands. My audiobooks are accessible on my phone or my computer, and I can build a library of unlimited titles.

I occasionally read print books, but not often because of the eyesight problem. I frequently listen to audiobooks in my apartment, but I generally carry my Kindle with me when I go somewhere. No earbuds are required to avoid disturbing other people, and my reading time—usually waiting for appointments—isn’t often long enough to cause severe pain in my arm.

Most people have a reading preference. I love books—print, electronic, or audio. No matter the format, the content is what’s important. A suspense novel is just as exciting, a nonfiction book is just as informative, and a romance novel is just as romantic regardless of the format.