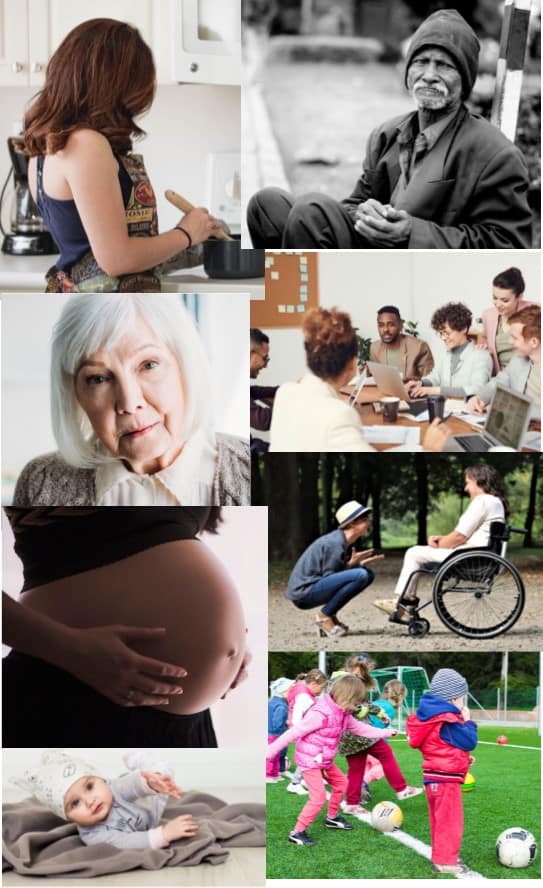 What do the people in the photos in this collage have in common? They are all wonderfully made by our Lord, in His image. Even the one who is visible only in the shape of her mother’s body. Even the dirty one begging on the street. Even the ones who can’t walk, whether because of infancy or disability.

I’ve been thinking a lot about this for several reasons. January 22 was the twenty-eighth anniversary of my stroke—the event that made me recognize my own mortality. Praise God, I recovered, and while I have “deficits” as the medical community calls them, I am functional. January 22 was also the forty-seventh anniversary of the egregious Roe v. Wade Supreme Court decision, effectively declaring unborn babies less than human and worthy of death. I have recently returned from visiting a relative diagnosed with terminal cancer, making me think of the increased acceptance in society of euthanasia.

It doesn’t matter if the baby is unborn, if the elderly person is useless by society’s standards, if the sick person is going to die soon. Each of them is still a precious child of God and worthy of life, dignity, and care. None should be murdered in the womb or killed before God’s timing or abandoned without care.

God is the only One who has the right to determine when we are born and when we die. Sometimes our plans don’t coincide with His, but in that case, we must follow His plan and not our own. Anything else is trying to put ourselves in the place of Almighty God.

I believe that we should honor all life and not end any life too soon. On the other hand, I believe that when God calls us home, it’s time to go. If we have a condition that can be treated, by all means, use God’s blessings of medical providers, medicine, surgery, and medical equipment. But if are at the end of our lives, we don’t have to desperately grasp at straws and try to extend our lives by extraordinary means.

My father had dementia, and for several years, he was totally uncommunicative with no control over his bodily functions. He had been born on the family farm and had lived there his entire life except for his time in the Army during World War II and the last years in a medical facility. He required round-the-clock care that couldn’t be provided at home, and the nearest facility that could meet his needs was about an hour away from the farm. We had asked the facility staff to let us take us home when he was near death so he could die on his beloved farm. They called us one Tuesday morning and said he was a few hours from death.

Daddy couldn’t sit up, so we strapped him into a wheelchair and loaded him in my sister’s handicap van. My sister and brother-in-law led the caravan, followed by another sister and my mother in one car, and me in the car behind them. All the way home, we prayed that Daddy would live until we got to the farm, as he had always planned to die in the place he was born and lived his life.

When we arrived home, Daddy was very confused and fought my brother-in-law and nephews trying to get him out of the van. He had the look of a trapped animal in his eyes. After they managed to get him in the house and into his own bed, he calmed down. He couldn’t speak or even make eye contact, but we were convinced he knew where he was. He began to calm, and over the next few days, the look in his eyes turned to one of complete peace. My mother, my sisters, my nephews, and I shared time with Daddy. One of us sat with him all the time, looking out the windows that wrapped around the room and telling him about the fields and the cattle we saw. He couldn’t see anything, and he couldn’t respond to our words, but we knew he was aware at some level of where he was. And whether he understood the words we said, he certainly heard the love in our voices.

Although he was expected to live only a few hours from the time the facility called us Tuesday morning, he was still alive on Friday night. The only change had been the look of fear being replaced with a look of total peace. I left Friday night to return to my home a hundred miles away to attend a meeting. But before I left, I shared some words with Daddy I never had before.

“Daddy, we’ll miss you if you’re not here. But if God is calling you home, it’s time to go. You’ve lived a good life, and you’ve done what you were supposed to do in this life. We’ll take care of Mama and the farm. You don’t have to worry about it any more. Your work is done. We all love you and will miss you.”

A few hours later, I got a call that Daddy had peacefully passed. He had answered God’s call.

Abortion, suicide, euthanasia, and ignoring problems like drugs and abuse that lead to early death are all wrong. Christians led the fight to end slavery, and thanks to their prayers and actions, institutionalized slavery in this country was abolished. Christians, let us lead the fight for life—advocating against abortion, suicide, and abortion and advocating for the homeless, victims of abuse, and those suffering the addictions of their choice.

I praise you, for I am fearfully and wonderfully made. Wonderful are your works; my soul knows it very well.

O God, the Creator and Preserver of all mankind, we humbly beseech thee for all sorts and conditions of men; that thou wouldest be pleased to make thy ways known unto them, thy saving health unto all nations. More especially we pray for thy holy Church universal; that it may be so guided and governed by thy good Spirit, that all who profess and call themselves Christians may be led into the way of truth, and hold the faith in unity of spirit, in the bond of peace, and in righteousness of life. Finally, we commend to thy fatherly goodness all those who are any ways afflicted, or distressed, in mind, body, or estate; that it may please thee to comfort and relieve them, according to their several necessities; giving them patience under their sufferings, and a happy issue out of all their afflictions. And this we beg for Jesus Christ’s sake. Amen.