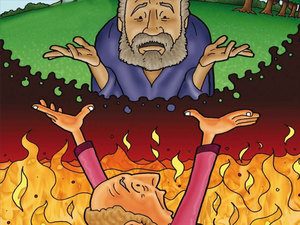 “Now there was a rich man, and he habitually dressed in purple and fine linen, joyously living in splendor every day. And a poor man named Lazarus was laid at his gate, covered with sores, and longing to be fed with the crumbs which were falling from the rich man’s table; besides, even the dogs were coming and licking his sores. Now the poor man died and was carried away by the angels to Abraham’s bosom; and the rich man also died and was buried. In Hades he lifted up his eyes, being in torment, and saw Abraham far away and Lazarus in his bosom. And he cried out and said, ‘Father Abraham, have mercy on me, and send Lazarus so that he may dip the tip of his finger in water and cool off my tongue, for I am in agony in this flame.’ But Abraham said, ‘Child, remember that during your life you received your good things, and likewise Lazarus bad things; but now he is being comforted here, and you are in agony. And besides all this, between us and you there is a great chasm fixed, so that those who wish to come over from here to you will not be able, and that none may cross over from there to us.’ And he said, ‘Then I beg you, father, that you send him to my father’s house— for I have five brothers—in order that he may warn them, so that they will not also come to this place of torment.’ But Abraham said, ‘They have Moses and the Prophets; let them hear them.’ But he said, ‘No, father Abraham, but if someone goes to them from the dead, they will repent!’ But he said to him, ‘If they do not listen to Moses and the Prophets, they will not be persuaded even if someone rises from the dead.’” ~ Luke 16:19-31

Interesting that the rich man isn’t named, but the poor man is. Likely no one knew the poor man’s name when he was lying at the rich man’s gate, but everyone knew and admired and perhaps envied the rich man. Also interesting that the rich man thought he deserved for Lazarus to leave Abraham’s bosom and come to the place of torment to provide comfort to the rich man. Jesus told us it was harder for a camel to go through the eye of a needle than for a rich man to get into heaven. That doesn’t mean that money is evil or for men to have wealth is bad. But it seems that being rich gives people a sense of entitlement, a feeling that they deserve the blessings they have received, when, in fact, no one has anything that God hasn’t given them.

Father God, I am not rich in our society, but by the standards of most of the world, I’m very wealthy. I’m not part of the wealthy, but that doesn’t mean I’m immune from thinking I deserve all the blessings You have given me. Remind me that I have nothing and am nothing on my own. You have given me all the resources I have, and I don’t deserve them. Give me a grateful and a generous heart to share what I have with others. In the name of Jesus Christ. Amen.