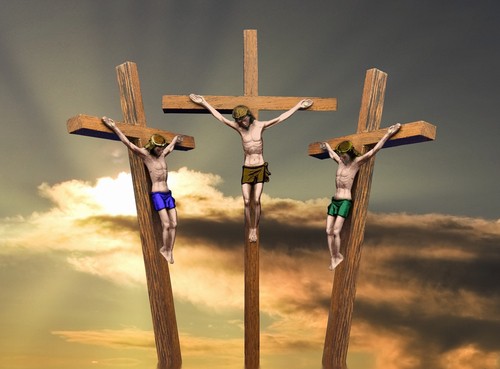 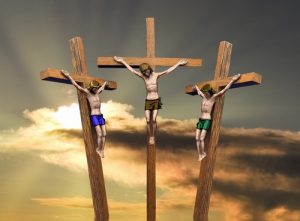 When they came to the place called The Skull, there they crucified Him and the criminals, one on the right and the other on the left. But Jesus was saying, “Father, forgive them; for they do not know what they are doing.” And they cast lots, dividing up His garments among themselves. And the people stood by, looking on. And even the rulers were sneering at Him, saying, “He saved others; let Him save Himself if this is the Christ of God, His Chosen One.” The soldiers also mocked Him, coming up to Him, offering Him sour wine, and saying, “If You are the King of the Jews, save Yourself!” Now there was also an inscription above Him, “THIS IS THE KING OF THE JEWS.” One of the criminals who were hanged there was hurling abuse at Him, saying, “Are You not the Christ? Save Yourself and us!” But the other answered, and rebuking him said, “Do you not even fear God, since you are under the same sentence of condemnation? And we indeed are suffering justly, for we are receiving what we deserve for our deeds; but this man has done nothing wrong.” And he was saying, “Jesus, remember me when You come in Your kingdom!” And He said to him, “Truly I say to you, today you shall be with Me in Paradise. ~ Luke 23:33-43

The crowd mocks Jesus, taunting Him that He can’t save Himself. Yet Jesus doesn’t tell them that He could call in all the angels of Heaven to save Him. He doesn’t tell them He is Lord of lords and King of kings. He doesn’t defend Himself or throw their words back at them. Instead, He prays to the Father to forgive them! He was becoming sin for the very people who were killing Him. And if they, like the criminal, repented, their sins would be washed away in the precious Blood pouring from the cross.

Father, forgive me for I know not what I do. Jesus died for my sins. The crowd at the cross who called for His death are no guiltier than I am, for my sins put Him on the cross. What an amazing love! Give me a grateful heart and empowerment by the Holy Spirit to live for His. In His name. Amen.