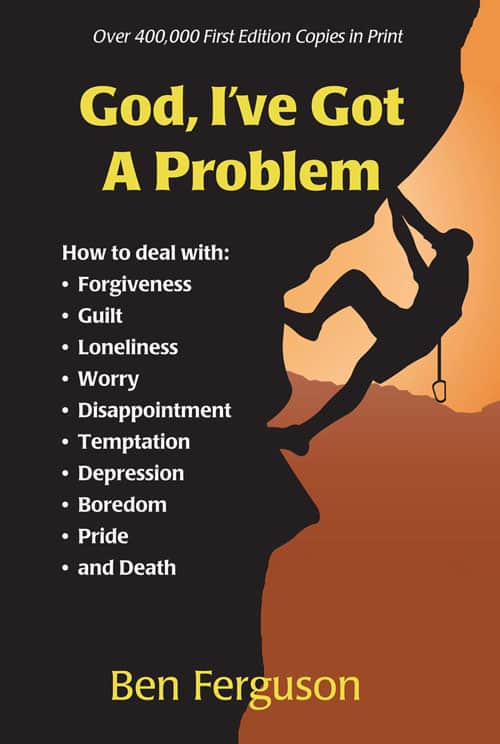 This is Part 2 of the post from Ben Ferguson, author of God, I’ve Got a Problem, about why and how he wrote the book. Part 1 appeared last week.

My role in the ministry is communicating with the chaplains and providing a listening ear when they hit the emotional, physical, and spiritual wall. During frequent email conversations, a couple things became apparent rather quickly.

First: Many conversations we have revolve around life’s issues and struggles the young warriors face when thousands of miles from home. The conversations chaplains are having with their young warriors take me back thirty-plus years to similar conversations with members of my congregation, so my copy of the first edition is getting dog eared, and many notes are written in the margins.

Second: One chaplain said, “Chaplains have the same struggles, issues, and problems as their soldiers.” Then he asked, “Who wants to talk to a depressed chaplain?” When chaplains began to feel comfortable with me as a resource outside the chain of command, they began sharing personal issues, struggles, questions, and their real feelings, without fear of it affecting their career. I realized some of the conversations we were having mirrored the feelings and struggles I experienced as a young pastor with no one to share my hurts, questions, feelings, and insecurities. I wanted to be the “pastor” to them I didn’t have many years ago. When a senior chaplain started calling me “chaplain to chaplains,” I was honored and humbled.

Word about rewriting the book began to spread, and someone asked, “Are you going to make more money than you did on the first edition?” Really! Anyone who ever writes a book knows writing a book, especially a Christian book, to make money is on a fool’s errand.

I began thinking about rewriting and updating the book but was content to write excerpts to chaplains and be a sounding board until one wrote as he was ending a tour in Afghanistan, “You have been a life preserver in an ocean of emotion.” I mentioned to another chaplain friend, CH Jerry Sherbourne, that I was thinking about rewriting the book. He introduced me to Lillie Amman, a member of the congregation he served as a civilian pastor, who had edited some of his work. I knew finding a good editor was a critical issue that was now resolved…no more excuses.

I began the rewriting process and made good progress until an obstacle got in the way—my day has only twenty-hours. A decision had to be made. At the time I was teaching an adult Bible class, we had over one hundred chaplains downrange, and my inbox was overflowing every morning. The chaplain’s needs and issues were now while a book could be helpful a year from now. I decided to give up teaching the class, put the rewrite on hold, and focus all my energies on caring for chaplains.

The drawdown of troops from Iraq in 2011 reduced the number of chaplains to the point I was able to split time between communicating with them and writing. By the summer of 2013, the long gestation period was over, and Lillie delivered my “baby” to the printer.

The toil and struggles of writing were rewarded when one chaplain who walked through the valley of the shadow of death alongside warriors said:

In the fog of war there are no quick fixes or easy answers. However, this book offers a resource that with clarity and conciseness applies Bible stories to assist when life stories meet crisis points. It’s a cargo pocket just-in-time training tool. The chapter summaries nail it. ~ CAPT O. J. Mozon, Jr., CHC, USN (Ret)

The book is available in print or Kindle version.