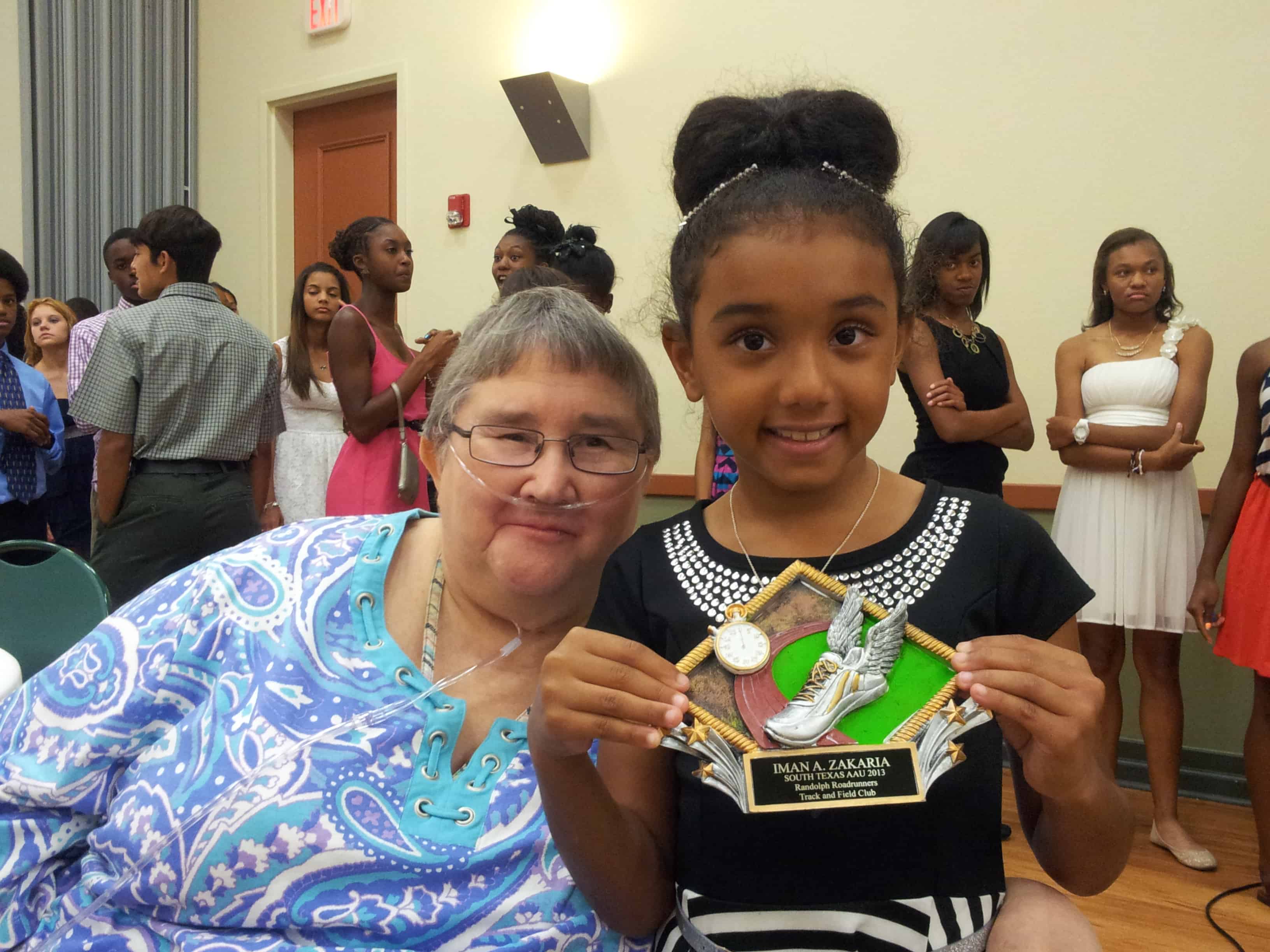 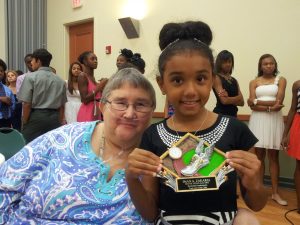 I haven’t gotten out much in the last few years. First, I had health problems of my own, then my husband developed Alzheimer’s. I cared for him until his death, and he  didn’t like people to see him in his diminished condition. We went to a lot of doctors’ appointments, and we went to Walmart and Denny’s once a week. Other than that we stayed at home most of the time.

Since Jack’s death last September, I have been dealing with health issues. Finally I got on oxygen and am able to be much more active. I go to Sunday School and church on Sunday mornings and have been attending a weekly Bible study. Tonight I attended a special event—the end-of-the-year banquet for the Randolph Roadrunners Track & Field Club.

Iman Zakaria (pictured above with me at the banquet), the daughter of my friends Shawne and Amir Zakaria, finished her first season with the Roadrunners by participating in the Junior Olympics as a member of the relay team. The team ran their best time ever and had a wonderful experience at the meet in Detroit.

I didn’t expect to be able to attend the banquet because I don’t drive much and not at all at night. However, Amir took Iman, her grandmother—my friend Ethel Stewart, and me while Shawne was at the facility setting up for the banquet.

Although Iman was the only athlete I knew, I enjoyed the evening and found it extremely encouraging. We hear so much about troubled kids and broken homes that sometimes it seems as if all families are dysfunctional. Greed and selfishness are so common we forget how much generosity and selflessness there is.

Tonight I saw children and young people from elementary through high school recognized for their participation. The videos of the kids involved in their sports showed athletes having fun as they pushed themselves to excel.

I saw proud parents who supported their children throughout the season–taking them to practices and meets, working at fundraisers, and encouraging the athletes to be their best.

I saw coaches committed to encouraging, teaching, and developing the athletic skills of other people’s children. Although the coaches are successful in training the kids in track and field, the most important thing I saw was the love that these men and women have for the children in their charge. The coaches’ affection for the children was as obvious as the children’s love of their coaches. The coaches are strong role models for the young people, especially significant because most of the coaches and many of the athletes are African-American, and young black men (like all young men) need role models of the caliber of these men and  women.

Many other volunteers make this club successful. Behind the scenes, the admin staff keeps things running smoothly. They are as dedicated to the kids as the parents and coaches.

Thanks to Shawne and Amir for inviting and taking me to the banquet. Congratulations to Iman for her success in her first year of track. Kudos to the coaches, staff, parents, and athletes of the Randolph Roadrunners.