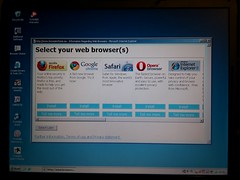 My last post about spam generated some interesting comments.

One commenter suggested that spammers have to spam because they can’t afford to pay for backlinks and have no other way to rank well in the search engines. I totally disagree with that position and wrote a long comment in rebuttal. I got on my soapbox so much I decided to move the soapbox to a post instead of a comment.

There are three specific reasons that I disagree with the theory that anyone has to spam.

Reason #1. I don’t think spamming is going to get them to the first page or anywhere else in Google or any other search engine. Few if any of their comments will ever appear on any blog because they will be caught by spam filters. If the comments do appear anywhere, it will be on sites that don’t do a good job of screening for spam. No one achieves a high page rank by allowing spam comments, so the only places where spam is likely to slip through won’t help the spammers with the search engines.

Reason #2. It’s not necessary to spam to get decent rankings in the search engines. I have never spammed anyone in my life, and I have not gone out of my way to optimize my site for any keywords. This is a hobby for me, so I don’t work on getting traffic. Yet this blog is a PR4 and ranks well in the search engines. For example, posts on this blog are #1 on Google for “freelance editing rates” and in the top 10 for “creating fictional characters.” I figured that out only after getting lots of comments on those posts on a regular basis and deciding to see where the visitors were coming from. When I looked at Google Analytics, I realized that a large percentage of people coming to those posts come from search engines. I haven’t checked out any other terms, so it’s possible there are more terms for which this blog ranks well. If I had worked on search engine optimization, I’m sure I could rank high for a number of search terms. I’ve done it by providing  content that at least some people want to read and by leaving relevant comments on other blogs. I do those things because I enjoy doing them; fortunately, they also happen to be good SEO techniques. 🙂

Reason #3. Aside from reasons #1 and #2, everyone has the freedom to choose. No one is holding a gun to the spammers’ heads saying, “Spam or I’ll shoot.” Even then, the spammer has a choice. I’m sure most of us would choose to save our lives, but we could make the other choice. There is always a choice. It’s possible, though I don’t think likely, that the choice is either to do something wrong or to fail in business. If those were my only choices, I would rather fail in business than to do something unethical to succeed.

One of my pet peeves is to read in a novel:  “She had no choice but to …” Perhaps she shoplifts food because she sees no other way to feed her family. She thinks she has no choice, but she can choose whether to let the family go hungry or to shoplift food.  Shoplifting may be the best choice she can see in the situation, but it is a choice. In most situations, there are other, less obvious, options that we may not be able to see. But even we see only two extreme options, we do have a choice.

No, spammers don’t have to spam any more than the heroine in the hypothetical novel has to shoplift.

I’ll get off my soapbox now and see what you have to say about choices. Do you think there are circumstances where “she had no choice”?