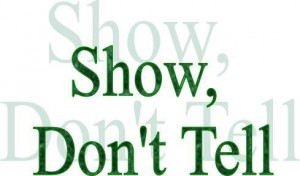 But I advise my clients to show and tell.

You show in an action scene, like in a movie:

You tell in narrative summary:

Should you show or tell?

When I tell clients they are doing too much telling and not enough showing, they ask me how to change from telling to showing.

Let me give you an example. Before is all narrative summary.

Eleanor got into the car and put her packages onto the front seat.  She was glad to be finished at the mall.  She didn’t like crowds, but she had to buy Christmas presents for her family.  She drove out of the parking lot and onto the street.  When she was stopped at the traffic light, she heard a man’s voice from behind her seat.  He told he had a gun and if she did what he said, she wouldn’t be hurt.  He told her to turn right at the next intersection.

After is an action scene.

Eleanor  juggled an armload of packages as she opened the car door. She tossed the bags to the far side of the car, breathing a sigh of relief that she’d passed up the glass figurine she’d considered for Sue. The blouse she’d ended up choosing was as unbreakable as the stuffed toys for her nieces and nephews.

She closed her eyes and took a deep breath. Man, I hate crowds. When will I learn to get my Christmas shopping done early? If I could stand the disappointed looks on the kids’ faces, I wouldn’t even bother.

Vowing to take something for her headache and go straight to bed the minute she got door, Eleanor started the car and drove out of the parking lot. At the intersection of Bayles and Crockett, she stopped for a red light, massaging her temples as she waited for the light to change.

Eleanor jerked her head up at the sound of a man’s voice coming from the back seat. Her hands trembled on the steering wheel as she told herself she’d fallen asleep and was in the middle of the nightmare. She started to look behind her.

What he didn’t say frightened her more than what he did say. “Please don’t hurt me. I’ll do whatever you say.” Her voice quavered and tears threatened.

“The light’s green. Drive to the next intersection and turn right. And no funny business. Understand?”