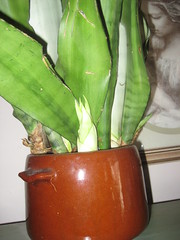 I grew up on a farm so you would expect me to know something about plants. However, south Texas was experiencing the worst drought in history for much of my childhood. Though the drought we’re in right now is more severe than the 1950s drought, the earlier one is considered the worst because it lasted so long—more than seven years.

My father turned to chicken farming after it became impossible to grow crops or provide feed and water to the cattle. He even gave up growing his beloved vegetable garden because he couldn’t water enough to keep the plants alive.

So as a young adult, I had no experience with plants. When I worked as an employment counselor for the hard-core unemployed in the 1960s  War on Poverty, I wanted to brighten up my dreary office. I bought a small ivy plant at a church bazaar. I dug up some dirt from the backyard and planted the ivy in a small cheese crock. In spite of  my lack of knowledge, the little vine thrived.

Mr. Martin, the supervisor of another department and a plant lover, brought me a mother-in-law’s tongue (a.k.a. snake plant) as a companion to my little ivy. Still knowing nothing about plants, I followed the same formula as I had for the ivy: dirt from the backyard in another little cheese crock with no drainage. Like my church-bazaar vine, the mother-in-law’s tongue thrived.

Then Mr. Martin, a heavy smoker, told us he had been diagnosed with lung cancer. The day he went into the hospital for surgery, the snake plant started looking limp and pale.

Whoa! This had to be a coincidence, but I wasn’t going to take any chances. I decided I should learn something about plants. I bought a book and discovered I should have used potting mix instead of backyard dirt. I should have used a container with a drain hole or at least put a layer of rocks on the bottom of the crock for drainage. I bought potting mix and new containers. I haunted garden centers and asked questions until the clerks were ready to throw me out. If someone recommended plant vitamins, my plants got vitamins. If an expert said I need to fertilize, I fertilized.

All the attention seemed to make a difference. The little plant perked up and started looking like its normal happy self about the time Mr. Martin was released from the hospital.

All went well until Mr. Martin took a turn for the worse. So did the snake plant. I read more books; I asked more questions; I followed more advice. Mr. Martin improved, and so did the plant—temporarily. For the next few months, Mr. Martin had a series of ups and downs, and so did the plant he had given me. When Mr. Martin lost his battle with cancer, the little plant looked worse than it ever had. When I returned to the office after his funeral, my little snake plant was just a pile of mush on my desk.

Although I couldn’t save that little plant, in the process of trying to, I had accumulated dozens more plants (that soon grew to hundreds), acquired enough knowledge that people were asking me for advice, and developed a love for plants. A couple of years later, I quit my job, disillusioned with the War on Poverty.

After spending two decades managing a team of more than a dozen people maintaining thousands of plants in hundreds of businesses, I could write a book on the lessons I’ve learned from the plant world.

But the most important lesson—the one I learned when I tried to keep a plant alive as a sort of talisman of a person staying alive—was written long ago far more eloquently than I could express:

This post is an entry in Middle  Zone Musing’s What I Learned from the Plant World groupwrite project.

Added 8/17/09: Thanks to Matt Keegan for using this post as inspiration for You  Want to Pull in Readers? Tell a Story.