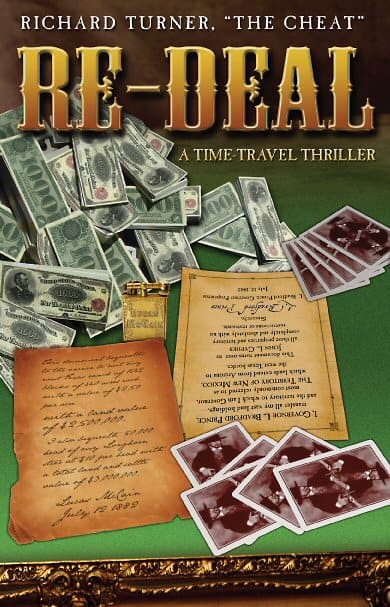 As you know if you’ve read my blog for some time, I am always as excited when a client publishes a new book as I am about my own books. Sometimes I describe my work with authors as being that of a midwife, helping to birth a bouncing baby book.

Re-Deal: A Time-Travel Thriller by Richard Turner, “The Cheat,”  was born earlier this month.

Richard began the novel eleven years ago, and by the time he found me, he had written 164,000 words.

Although he was at first appalled that I wanted to get rid of about a third of those words, he agreed that he would decide after I edited the first chapter. He couldn’t tell what I’d left out so he agreed to let me continue. I described how I eliminated excess words in a guest post at Poewar.

Re-Deal may be the most unusual book I’ve ever worked on—time travel back to the Old West, a hero who is a card mechanic and a karate expert, a sidekick who is a karate black belt and an evangelist, the Cyphers who are the personification of evil, gambling and poker, a life-and-death struggle against time … and a guardian angel who earned her name Miss Guided by not always getting her assignments quite right.

Although the story is fantasy, Richard Turner writes from experience. He is known as “The Cheat” and has been called “the greatest card mechanic in the world.” He has performed around the world, produced a series of DVDs on card manipulation, created board and puzzle games, earned a fifth-degree black belt in karate, and received so many awards  and honors that I’d still be writing next week if I tried to list them all. Oh … and he’s done all this with eyesight four times lower than legally blind.

Here is the back cover blurb:

Buckle up for time travel, karate, and gambling in this action-adventure thriller. Matt McCain, a young man trying to overcome personal loss and family misfortune, and his amigo Juan, a Mexican orphan turned evangelist, are pitted against the Cyphers, a family that utilizes evil for every gain. The presence of Miss Guided, the angel who doesn’t always get it right, changes them all.

With more twists than a switchback trail, Re-Deal is a time traveling race against evil and misfortune. An 1882 poker showdown promises to change history forever, and Matt McCain aims to be the winner. But first he must match skills with the greatest cheaters of the Old West—from Doc Holliday to S. W. Erdnase.

The players, the power, and the present all hinge on the journey back to 1882, a trip through time that Re-Deals history in a startling conclusion.

In my fair, balanced, completely unbiased view—OK, I admit that’s not quite true. 🙂 —in my completely biased opinion, Miss Guided is one of the most original fictional characters ever created. I’m excited that she will be visiting A Writer’s Words, An Editor’s Eye on Friday. I’ve asked her to bring Richard along so you can ask questions of both of them.

I’m confident you won’t meet a guardian angel anywhere else this week, and I know you’ll never meet anyone like Miss Guided!