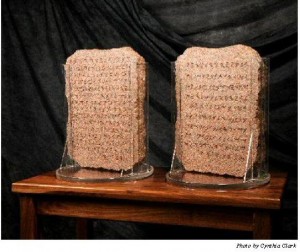 Aundrea Hernandez, designed the header for my blog as well as covers for Dream or Destiny and for several clients’ books.

Last fall, she asked if she could refer a client who needed a Web site. Although I generally create Web sites for my author clients, the only other sites I have created have been for my church and for my brother, a commercial real estate agent.

I hesitated at first but agreed to meet with  A.E. Tracy Potts. He came into my office carrying the Two Stone Tablets of the Ten Commandments and talking about his mission. He believes he has been called by God to take the Name of God out into the world on stone tablets of granite like those on which God wrote the Ten Commandments with His own hand. My immediate reaction was to jump at the chance to be part of this project; however, I didn’t agree right away because I wanted time to pray about my decision.

After praying, I felt sure I wanted to be involved, and I have been working with Tracy on the Web site for HaShem Artworks since then. Tracy and his dedicated team had already been working for many months. Tracy researched the language that was in use at the time the Ten Commandments were written and created a Phoenician Paleo-Hebrew font. He studied the kind of granite that was on Mount Sinai and what rough-hewn granite tablets would have looked like. Under divine inspiration, he designed a special table with rotating disks and acrylic holders to display the Tablets. He found the stonecrafter and the woodcraftsman and an illustrator to create several pieces of artwork.

The video below depicts the creation of the Two Stone Tablets of the Ten Commandments in the Mind of God. Listen for the blessing that God promises wherever He causes His name to be remembered.