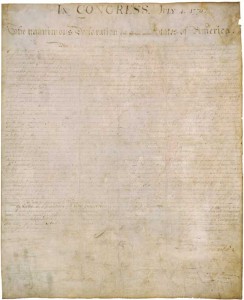 When I read the theme for this month’s group writing project at Middle Zone Musings, it was déjà vu all over again. I was sure Robert had run out of topics and was starting to repeat himself. The topic is What I Learned from Government, and I knew I had written on that subject before.

But when I checked my archives, I discovered that the topic had been What I Learned from the World of Work. My post, What I Learned from Working for the Government, listed seven things I learned. I hope you read the original post as I’m not going to repeat those seven lessons. Instead I’m going to expand on one lesson that is very timely.

Even programs that are supposed to be for the benefit of people in need don’t always serve the needs of those they are designed to serve.

The United States was founded as a republic, with limited federal powers. National security is government’s responsibility. Ensuring home ownership for citizens who can’t afford the houses they’re buying is not the role of government. It is a formula for disaster—as we’ve seen recently. Certainly many institutions and individuals—including greedy financial institutions who tried to make a fast buck, greedy individuals who tried to buy homes beyond their means, and greedy investors who tried to get rich quick—share the blame for the credit crisis. However, the root cause is the unwise, if well-intentioned, legislation and regulations designed to increase the opportunity for home ownership to more and diverse individuals.

My heart goes out to individuals caught in the situation. But did those visionary programs to make home mortgages more accessible really help anyone? I don’t think so. Financial institutions would have been better off if they had made loans to people who were likely to be able to meet their obligations. Individuals who bought homes beyond their means would have avoided losing their homes or getting into serious financial trouble if they had purchased homes within their means or continued to rent. Investors might not be facing huge losses if they had invested more wisely.

I quit my government job because I reached the conclusion that the government programs designed to help poor people were actually harming rather than helping. The War on Poverty was declared nearly 50 years ago, and we lost. People in those programs haven’t achieved success; in most cases, they’re still in government programs, still receiving handouts. Yet, people work their way out of poverty every day. They may get some temporary help, but they don’t expect government to make them successful. They work for their own success.

Yes, government taught me that good intentions don’t guarantee good results. In the coming months, we’ll see many new proposals and many new programs designed to help people. Will they help? Or will they hurt?