My husband’s Dobermans used to curl up at his feet and put their heads in his lap. The dogs and I weren’t best buddies, but we got along until the morning I was running late for work.

This was back in the days when I showed up at my interior landscape company by the time the doors opened, before I learned to trust my managers.

This particular morning I was already behind schedule when I remembered I had to stop for gas. As I was backing out of the driveway, my husband, who had worked all night on a law enforcement job, pulled in beside me. I asked him to call the office to tell them I would be late. Instead, he said, “You call them, and I’ll get gas for you.”

After he pulled away, I realized the house was locked and my key was in my purse … on the front seat of the car. I went into the backyard to get the spare key out of its hiding place. Dobie, the male dog, who been chained to keep him away from the female in heat, had broken the chain and was engaged in … er … amorous activities … with the female. Without thinking, I walked up to him and gave him a light kick to get his attention. 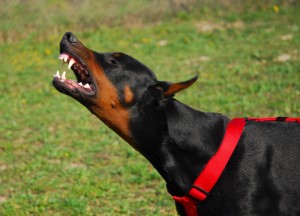 Fortunately, it took him a few seconds to … disconnect, giving me time to turn around. He came after me, knocked me down, and started biting me on the top of my head. I tried to fight him off, but my resistance led only to bites on my arms.

After what seemed like forever, I thought I would surely die. I prayed, Lord, it looks like I’m about to meet You. I don’t want to be fighting when I enter Heaven. Forgive my sins and take me into Your Kingdom. Then I went limp, at peace and ready to die.

As soon as I went limp, Dobie let me go. He stood and watched while I got up and walked around to the front of the house. When Jack returned, he saw me standing in the carport, covered in blood. He wanted to take me to the hospital emergency room, but I preferred my family physician, who has a minor emergency clinic. We got there before opening, but one of the staff saw us through the door and took me to the emergency room to lie down.

Dr B arrived in a few minutes and gave me pain medication, but he delayed stitching the wounds until he talked to a plastic surgeon. He said my skull was exposed in an area about the size of a quarter, and he thought I need skin grafts. The plastic surgeon told him, “Stitch her up as best you can. We’ll do the grafts later because dog bites almost always lead to infection. Let’s get the infection cleared up before we graft.”

The pain was so intense that I couldn’t sit up. Dr B and his nurses used pillows to raise my head enough for him to reach the wounds. He took more than 50 stitches in my head and several in my arms. As he sewed, he said, “You’re lucky he got your head. If he’d got your carotid artery, you’d be dead now.”

Dr B prescribed antibiotics and told me to see him every day to clean the wounds and check for infection. Although I spent several days in bed with excruciating pain, the wounds healed with no infection and no grafts.

Twenty years later, the only physical evidence of the attack are two scars on my right arm – one in the shape of a five-pointed star and the other in the shape of a crescent moon. But, as usual, the lessons remain.

But, most importantly, I learned sometimes the best thing to do is to let go. I believe that if I had kept fighting, Dobie would have continued to attack until I was dead. Our natural instinct is to fight back – and many times, we need to fight back. But if you seem to be fighting a losing battle, maybe it’s time to go limp, let your enemy think you’re dead … and live to tell the story.

This post is my entry in What I Learned from Animals at Middle Zone Musings and High Callings Blogs.