In the last post, I talked about magical thinkers, people with a sense of entitlement who believe because they want something, they should have it and who expect someone or something else (God, the government, society …) to provide what they feel they deserve.

Now, I’m going to bring the subject back to writing. My comments are not meant to be negative and critical. They are meant to make us take a close look at ourselves.

Many writers (especially novelists and writers of literary fiction) I’ve met through the years are magical thinkers.

At one time, I was listed as a provider of editing services on the Web site of one of the largest subsidy publishing companies. Although I received a number of queries, I never got a client because the authors who contacted me didn’t really believe their work needed editing. They expected me to tell them their words were golden, and when my sample edits actually suggested changes, they didn’t agree.

One writer sent me the first chapter of a novel that was so unbelievable I found myself thinking, That couldn’t happen! The book began with a secret agent during wartime approaching a foreign woman alone in a bar in a country at war and recruiting her as a spy. I suggested he might consider whether it was realistic that a woman would be alone in a bar in an enemy country during wartime and that a secret agent from a third country would openly approach and recruit her without any previous knowledge or contact. (Note, I didn’t tell him this was a bad plot. I didn’t tell him he should change his plot. I simply suggested he consider whether readers would suspend disbelief while reading the story.) He informed me the book was fiction – that meant is wasn’t true, so it didn’t matter if it was believable or not. He couldn’t understand that fiction isn’t true, but it does have to be believable. Even if the plot is not realistic, the reader has to suspend disbelief and believe it could happen. 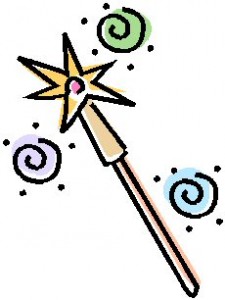 As far as I know, this writer didn’t hire an editor. He paid a lot of money for a subsidy publisher to print hundreds or thousands of copies of books that few people will ever read. I suspect he didn’t try to market the book, either, expecting hordes of buyers to order a self-published novel, written by a first-time author with no input from anyone else. And faced with a garage full of unsold books and a huge dent in his wallet, he probably found someone else to blame. Magical thinkers never blame themselves for anything.

. The post lists a few of the reasons your book might not be published … and many of those reasons are the result of magical thinking.

If you want to succeed as an author – whether your publisher is a huge New York conglomerate or yourself, you can’t be a magical thinker. You have to take responsibility; learn the craft of writing and the publishing industry; write, write, write … revise, revise, revise; then once you’re published, market, market, market. Then you just might experience real magic – a successful book!