I tend to write about my stroke often for two reasons:

This post is part of the group writing project: It’s Funny NOW, But Then …

Recently, I was chatting on the phone with a friend who had a stroke about a year ago. I have encouraged her by sharing my own experiences with her. She started laughing on the phone and said she just thought about the story I told about my MRI.

Back then, the hospital I was in did not have an MRI machine but used a machine that traveled from hospital to hospital in a trailer, sort of like a bookmobile except an MRI machine replaced the books. The MRI was due at the hospital a couple of days after I was admitted, so my doctor scheduled an appointment. 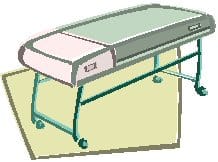 Two nurses’ aides showed up in my room with a gurney. I couldn’t do anything for myself at that point, and as heavy as I am, it took several people to transfer my dead-weight body from the bed to the gurney. The aides called for help and when help finally arrived, they transferred me to the stretcher. The other two people left, and the aides prepared to transport me to the MRI.

Oh, no,” cried one. “There’s no rails or safety belts on this stretcher. We can’t take her outside through the parking lot on this.”

“We don’t have time to change,” said the other. “You know how long it took to get help to put her on this one. We’ll be in big trouble if we’re late for the appointment. They schedule those appointments so close together, it’ll throw the schedule off for the whole day.”

“We’ll be in more trouble if she falls off on the way over.”

They debated back and forth for several minutes about whether they would be in more trouble if they spent the time to get more help or if they risked taking me outside on a gurney with no safety equipment. They never mentioned anything about the effects on me – only the trouble they would be in. I wanted to remind them that they were supposed to be concerned about the safety of their patient, but I still couldn’t communicate well enough to participate in the conversation. Finally, they decided the risk to them was less if they didn’t waste any more time.

So off we went, with the aides positioned in the way they thought would be best to catch me if I started falling. Through the door, bumping into the frame, down the hall, onto the elevator, down several floors, through the lobby, and out into a parking lot –a parking filled with potholes.

As we bounced along, the aides kept up a running conversation.

“I sure hope she doesn’t fall off.”

Although I couldn’t communicate, I certainly agreed with that sentiment!

Finally we made it through the first parking lot, across the street, and to the far end of the second parking lot where the MRI machine awaited us. I can’t really describe what it looked like, because I was flat on my back unable to see much except what was right in front of me. The MRI technician and the aides had to lift me a short distance into the machine … and then the pounding started.

If you’ve ever had an MRI of any kind, you know what I mean. Since then, I’ve had MRIs of various parts of my body, and I can assure you that a brain MRI is by far the most unpleasant. I’ve never been claustrophobic, but that experience just about made me that way. I couldn’t see anything, and the walls seemed to be closing in on me. Pounding, reverberation, clanging, rattling, banging … I thought it would never end.

Eventually, however, it did end, and it was time for the trip back to the hospital. As they lowered me from the MRI-mobile, I expected to land on a stretcher equipped for safety. After all, I’d been inside that metal cylinder being bombarded on all sides for nearly an hour, surely enough time for the aides to exchange the unsafe flat table on wheels with a gurney with side rails or safety belts … preferably both.

But no. As they started pushing me back across the parking lot, the two women continued the conversation as if there had been no interruption. About halfway across the lot, though, something changed. It started to rain!

“Oh, the pavement’s getting slippery.”

“Careful! She almost bounced off on that pothole.”

“Look, she’s getting all wet.”

“We can fix that.” The aide pulled the sheet that covered my body a little higher and covered my head.

“At least she won’t get too wet that way.”

“Yeah, but we’ll still in trouble if she bounces off when we hit these potholes.”

I lay there, covered from head to toe with a rain-soaked sheet, listening to the aides’ worries – not about me, but about getting in trouble – and praying for this to end soon.

The chatter of the two aides had distracted me from any other sounds in the parking lot, but after we crossed the street and were back in the main parking lot, I heard other voices.

“Oh, my gosh! Look – they’re carrying a dead body through the parking lot!”

“Shh. Show a little respect. Stand still and be quiet till they get the body inside the hospital.”

Bouncing over potholes, hearing I might fall off the gurney, the horrendous noises, the claustrophobia in the MRI machine … all paled when I realized I wasn’t dead!

Although I said a prayer of thanksgiving that I was alive, the whole experience had been traumatic. Only after a couple of years did I begin to see the humor. Now all my husband has to do is pull the covers over my head and say “That poor lady” to get us both giggling like teenagers. The incident became one of the best scenes in my novel Stroke of Luck. I’ve laughed over the story with friends more times than I count.