Robert Hruzek at Middle Zone Musings has another “What I Learned From …” Group Writing Project underway. The topic this time is vacation:

Hey, even if you’ve never taken a “formal” vacation, then surely you’ve taken a little “self” time, eh? Well, that qualifies as a vacation in my book. So go for it!

I’m going to take a little artistic license with the word vacation and talk about my first venture away from home after my stroke to attend a writing conference.
At the time, I was using a motorized scooter, so I made elaborate advance preparations. I arranged to ride my scooter to the door of the aircraft, then have the scooter gate-checked. I could walk down the aisle with the support of the seat backs, so I didn’t need any special help inside the plane. I had to present certification that the batteries in the scooter were the kind that could be carried as cargo before the scooter could be checked. I even made reservations for a handicapped van for the trip from La Guardia to the hotel.

Our flight was delayed out of San Antonio, so I barely made the connection in Atlanta. Since my scooter was checked all the way to New York, I had to have a skycap push me in a wheelchair down the concourse. My friend Grace Anne Schaefer was on the same flight from Atlanta to New York, and she was getting worried when I wasn’t onboard minutes before take-off. But I made it just in time … I thought. The doors closed behind me, the last person on the plane, and we prepared to lift off.

Then the pilot announced that there was a problem with the plane. We were told to keep our seats, as the maintenance crew was working on the problem and should have it corrected momentarily. More than an hour later, the pilot announced, “We regret our maintenance crew was unable to repair the problem. This flight is cancelled. See the ticket agent about changing your ticket for a later flight.”

Since I had to wait for a wheelchair, Grace Anne took both our tickets and went to stand in line to exchange them. When I finally de-planed, an agent told me they had already made arrangements for the next flight for me. When I explained that I was traveling with a friend, the agent bumped someone from the flight to let Grace Anne travel with me. There are some advantages to being handicapped! All the other passengers were standing in line for much later flights.

The other flight was in a different concourse, and the agent asked if I could walk a few steps to and from a car just outside the building. When I said I could, he arranged for a car to take us across the tarmac. The driver dropped us at the door, and we went inside a small lobby with an elevator and a flight of stairs to the main level. But there was a sign on the elevator “Out of Order.” I could not walk up a flight of stairs! There was no place to sit, and my balance was so precarious I knew I couldn’t stand long. Grace Anne took my purse and my ticket and went upstairs to find help. I leaned against the wall and waited.

Soon, the elevator doors opened. The man inside said, “I’m still working on the elevator, but it’s safe enough for me to take you upstairs.”

When we reached the main floor, I looked around for Grace Anne and couldn’t see her anywhere. A skycap approached with a wheelchair and said she would take me to the gate. When I hesitated and told her I was looking for my friend, she said lots of flights were being delayed because of bad weather, causing a shortage of wheelchairs. If I didn’t get in the chair right then, I might not get another chance. I dropped into the chair and told her the gate number. She whisked me through the concourse, mentioning several times that people didn’t always know they were supposed to tip a skycap for pushing them in a wheelchair. She even told me how much I should tip her. Well, she didn’t get any tip out of me because I didn’t have my purse.

When we reached the gate, she hurried me out of the chair and disappeared. I was sitting in a waiting area with my back to the desk. I twisted around to look for Grace Anne … and discovered I was at the wrong gate! This was a flight to Chicago, not New York.

I was still weak, and the trauma I had been through had totally exhausted me. I sat there wondering what in the world I was going to do. The gate across the corridor was empty, but after a while, an agent walked up and started looking through some papers. I dragged myself up out of the chair and staggered over to the desk.

“Please help me. I’m at the wrong gate, and I don’t know where I’m supposed to be. I don’t even know the flight number. I’ve lost my friend, and she has my ticket and my purse.” I leaned against the desk for support and tried not to sound as desperate as I felt.

The agent patiently looked up the information on his computer, flagged down a cart, and told the driver where I needed to go. On the way through the concourse, I found Grace Anne, who was looking for me. We finally got to the right gate, only to learn that the flight was delayed because of weather.

We spent several hours in the airport. A couple of times I had to go to the restroom, so Grace Anne went looking for a wheelchair each time. We didn’t dare leave to find something to eat, as the agent kept telling us they would be boarding the plane any minute.

The flight was finally called, and we made it to New York without mishap. But, of course, when we arrived, we had missed my handicapped van by many hours. We had to call and wait until one was available. The trip through New York City traffic during rush hour was something I’d just as soon not experience again. I swear on many occasions we were only a couple of inches from other vehicles.

We arrived at the hotel after 6:00 PM, and we had tickets for a Broadway play at 7:00 PM. The tickets were supposed to be at a booth in the conference registration area. So Grace Anne went to find the tickets while I went to the room with the bellman and our bags. Shortly after all our luggage was in the room, Grace Anne called and said the registration area was closed, and there was a sign that tickets were at Will Call in the theater. Fortunately, the theater was next door to the hotel – we had carefully planned to avoid having to deal with  handicapped transportation again. Grace Anne went for the tickets, and I scooted on over to meet her in the lobby. I parked my scooter as arranged and walked the few steps down the aisle to our seats just as the curtain rose.

Although I enjoyed Les Miserables, I could barely make it the few steps to the scooter at the end of the performance. We went back to our room and agreed that no matter how much it cost, we would order room service. We hadn’t eaten since breakfast, and it close to 10:00 PM by this time. Grace Anne placed the order while I got in the shower to try to ease some of my aches and pains from the difficult day.

Dinner was delicious, and after a hot shower and a good meal, I decided I would live. Surely I wouldn’t face any major challenges at the conference.

The next morning, I discovered that the Marriott Marquis had meeting rooms on the second through the fourth floors – with only an escalator connecting the floors. I had selected the workshops I wanted to attend but had to completely revise my plans because I was limited to those on the second floor. 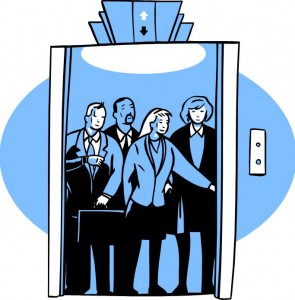 One day there were four conference attendees in wheelchairs trying to get into the elevators. The others were in regular wheelchairs and got in sooner than I did since my scooter took up more room.

The last day of the conference, though, was even worse. I sat waiting for an elevator for nearly an hour. There was no one else on the floor. I felt so weak I was sure I was going to fall off the scooter. Finally I rode around looking for help. A young man was setting up a bar in one of the rooms. I asked him to call help for me. I went back to the elevator and waited … and waited … and waited … and waited. I went back and asked the young man again to get me help. He called Security, and after what seemed like a lifetime, someone came and escorted me through the kitchen, to the service elevator, and upstairs to my room.

Grace Anne had been wondering where I was, and she was so upset when I told her what had happened that she called Security and demanded an escort to the banquet that night. I was so exhausted that all I wanted to do was go to bed. But Grace Anne insisted I go to the banquet and awards ceremony. After a short rest and a shower, I felt a little better. Security escorted me to the main elevator, made room for me, and led me to the banquet room. At the end of the evening, my escort was back to see me safely to the room.

The trip and conference were physically and emotionally draining, but I still learned more than I ever imagined. I took reams of notes that I referred to over and over again long after the conference ended.

I learned five important lessons from this vacation aka writing conference: