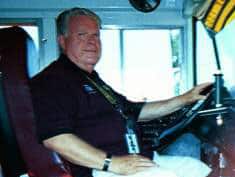 There’s a great article on GodUpdates about a retired man who took a job as a school bus driver. He had been one of the top-rated FBI agents in the country and later the CEO of a large corporation. However, he said his job driving kids to school was as significant as those jobs, and he wants people to understand that every job is important.

The article reminds me of my husband Jack. Years after his retirement from Civil Service, he saw a sign advertising for bus drivers. He said, “I’ve always wanted to drive a bus.” He applied, was hired, and spent about five years working in a couple of different school districts. He loved the job, and the kids loved him. He was strict but loving. Once he was sick and a sub filled in for him. When Jack returned to work, the sub asked him how he’d trained the students. He said those were the best-behaved kids he’d ever seen in a school bus. And I know how much the kids loved him because of the gifts Jack received at Christmas and year end from both students and parents.

Whatever you do, work heartily, as for the Lord and not for men, knowing that from the Lord you will receive the inheritance as your reward. You are serving the Lord Christ.

Almighty God, our heavenly Father, who declarest thy glory and showest forth thy handiwork in the heavens and in the earth; Deliver us, we beseech thee, in our several callings, from the service of mammon, that we may do the work which thou givest us to do, in truth, in beauty, and in righteousness, with singleness of heart as thy servants, and to the benefit of our fellow men; for the sake of him who came among us as one that serveth, thy Son Jesus Christ our Lord. Amen.