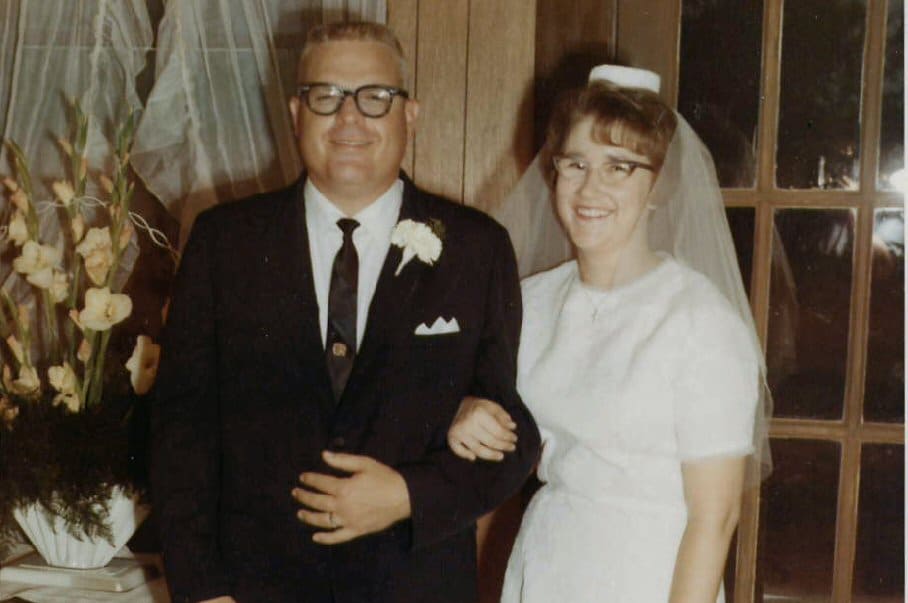 This photo was taken fifty-two years ago today, after our wedding ceremony held on the back porch of my parents’ home. It was a simple service that began our married life that was filled with love, laughter, and joy.

If my beloved husband were still alive today, he might have given me a huge, elaborate anniversary card. Or he might have given me a little scrap of paper torn off something headed for the trash with a lovely and sweet note on it. He was totally unpredictable and was known to do both—for our anniversary or my birthday or “just because.” I loved the little scraps of paper as much as the fancy cards, because both contained sincere and emotional expressions of his love.

For certain, we would have gone out for dinner, perhaps to a very nice restaurant or maybe to a favorite hole in the wall, but it would have been some place that we both enjoyed.

And we surely would have laughed a lot. There were very few days in our marriage that we didn’t laugh a lot. His sense of humor was the first thing I noticed about him, and it was one of the many things I always loved about him.

After his death, I compiled a book with memories shared by friends and family. The stories are funny, poignant, serious, sweet, joyous —everything but sad.

We proved the axiom that “opposites attract.” Jack was self-confident, brilliant, and outgoing, with a strong ability to come up with creative solutions to problems. I was shy, quiet, and insecure—at least at first. With his encouragement through the years, I became much more confident and secure. He always believed in me much more than I believed in myself.

Jack’s philosophy was “It’s easier to ask forgiveness than to ask permission.” A favorite example of that happened after my sister, who worked for our plant leasing and maintenance company, was injured when a ladder she was on to water plants high on a wall slid to the ground. Not wanting that to happen again, Jack went to the restaurant where the accident occurred, carrying a drill and a huge nail. Another sister, the maintenance supervisor for the company, was with him. Although she tried to convince him to see the manager, Jack confidently pulled the extension ladder out of the storeroom and carried it over to where the accident had occurred.

He leaned the ladder against the wall, got Nancy to confirm it was in the right position and at the right angle, and marked a spot on the floor at the foot of the ladder. Then he moved the ladder away and proceeded to drill a hole where the mark was. Nancy tried to stop him, saying he had to get permission from the manager first. Jack finished drilling, put the ladder back in place, and demonstrated how to put the nail in place before climbing up the ladder, then how to slip it out of the hole when it was time to take the ladder down.

About that time, the manager came over and demanded to know who Jack was and what he was doing. He calmly introduced himself, reminded the manager of the accident that had occurred a few days earlier, and showed how the huge nail would temporarily secure the ladder so it wouldn’t slide down the wall. After taking the ladder down, he moved a chair over the hole in the floor and said, “Look; you can’t even see the hole.” The manager shrugged and walked away.

Jack’s supreme confidence was exemplified in how he identified himself in relation to my plant business. He didn’t have day-to-day responsibilities in the company, but I called upon to deal with problems. He was just as adept in collecting delinquent payments from clients as he was in keeping ladders from sliding down walls. Whenever he talked to someone as a representative of Lillie’s Plantscapes, he always introduced himself as “Jack Ammann, Mr. Lillie.”

In the last few years of Jack’s life, he developed Alzheimer’s and lost all ability to reason and solve problems, his self-confidence, and his memory. However, he never lost his memory of me or his complete trust in me. He depended on me totally and never doubted that I would care for him and do what was best for him.

As surprising as it may seem, we had some wonderful times in those final years. We were together constantly, as it was not safe to leave him alone at all. Often he sat in front of the TV, not able to follow stories but able to enjoy outdoor shows, and I sat in my chair nearby reading. Jack loved to sit on the front porch and look out over the neighborhood. Often, he would turn to me and say, “We have a good life, don’t we?”

Yes, we did. We had a wonderful life. I was so blessed to share my life with him for forty-five years of marriage. I just wish he was still with me to celebrate fifty-two years.