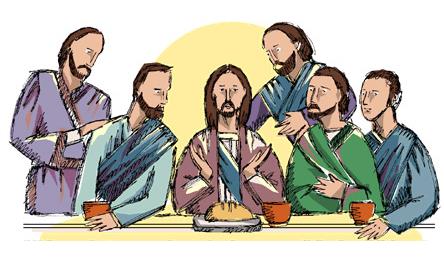 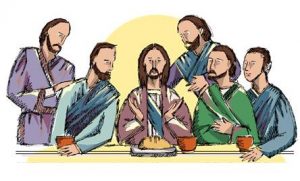 When Jesus had said this, He became troubled in spirit, and testified and said, “Truly, truly, I say to you, that one of you will betray Me.” The disciples began looking at one another, at a loss to know of which one He was speaking. There was reclining on Jesus’ bosom one of His disciples, whom Jesus loved. So Simon Peter gestured to him, and said to him, “Tell us who it is of whom He is speaking.” He, leaning back thus on Jesus’ bosom, said to Him, “Lord, who is it?” Jesus then answered, “That is the one for whom I shall dip the morsel and give it to him.” So when He had dipped the morsel, He took and gave it to Judas, the son of Simon Iscariot. After the morsel, Satan then entered into him. Therefore Jesus said to him, “What you do, do quickly.” Now no one of those reclining at the table knew for what purpose He had said this to him. For some were supposing, because Judas had the money box, that Jesus was saying to him, “Buy the things we have need of for the feast”; or else, that he should give something to the poor. So after receiving the morsel he went out immediately; and it was night.
Therefore when he had gone out, Jesus said, “Now is the Son of Man glorified, and God is glorified in Him; if God is glorified in Him, God will also glorify Him in Himself, and will glorify Him immediately. Little children, I am with you a little while longer. You will seek Me; and as I said to the Jews, now I also say to you, ‘Where I am going, you cannot come.’~ John 13:21-33

After Jesus gave Judas a morsel of bread, Satan entered into him. We know Judas had been under the influence of Satan for a long time—perhaps throughout the time he was with Jesus, because elsewhere in Scripture we are told that he was stealing from the treasury. However, John tells us that Jesus Himself specifically did something so Satan would entice Judas to betray his Lord. Jesus didn’t just sit back and let the devil be in control. He was in control the entire time, even when He was physically helpless and dying.

Lord, I can’t express how in awe I am of the love You—Father, Son, and Holy Spirit—have for me and for every one of Your children. To our human senses, it seems that the devil and an evil man orchestrated Jesus’ crucifixion, but You were in control of every step. Enable me to show my gratitude by living for You. In the name of Jesus Christ. Amen.