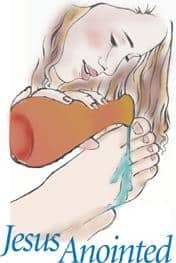 Jesus, therefore, six days before the Passover, came to Bethany where Lazarus was, whom Jesus had raised from the dead. So they made Him a supper there, and Martha was serving; but Lazarus was one of those reclining at the table with Him. Mary then took a pound of very costly perfume of pure nard, and anointed the feet of Jesus and wiped His feet with her hair; and the house was filled with the fragrance of the perfume. But Judas Iscariot, one of His disciples, who was intending to betray Him, said, “Why was this perfume not sold for three hundred denarii and given to poor people?” Now he said this, not because he was concerned about the poor, but because he was a thief, and as he had the money box, he used to pilfer what was put into it. Therefore Jesus said, “Let her alone, so that she may keep it for the day of My burial. For you always have the poor with you, but you do not always have Me.”
The large crowd of the Jews then learned that He was there; and they came, not for Jesus’ sake only, but that they might also see Lazarus, whom He raised from the dead. But the chief priests planned to put Lazarus to death also; because on account of him many of the Jews were going away and were believing in Jesus. ~ John 12:1-11

Criminals sometimes kill witnesses to their nefarious deeds so the witnesses can’t testify against them in court. In this case, the religious leaders wanted to kill a man raised from the dead so the miracle might be forgotten or disbelieved. We don’t go around killing people who cause us problems, but we do use them, hurt them, ignore them to protect ourselves or make ourselves look good. Jesus told us we deserve hell for calling our brother a fool—we are no better than the criminals who kill witnesses or the chief priests who planned to kill Lazarus.

Lord God, forgive me for hurting other people for my personal benefit. Let me put others before myself and never inflict anger or callous disregard on someone. In the name of Jesus Christ. Amen.