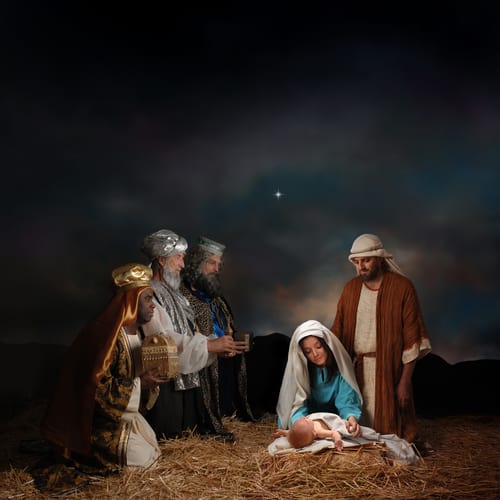 Matthew 2:1-12 (NASB)
1 Now after Jesus was born in Bethlehem of Judea in the days of Herod the king, magi from the east arrived in Jerusalem, saying, 2 “Where is He who has been born King of the Jews? For we saw His star in the east and have come to worship Him.” 3 When Herod the king heard this, he was troubled, and all Jerusalem with him. 4 Gathering together all the chief priests and scribes of the people, he inquired of them where the Messiah was to be born. 5 They said to him, “In Bethlehem of Judea; for this is what has been written by the prophet:
6 ‘And you, Bethlehem, land of Judah,
Are by no means least among the leaders of Judah;
For out of you shall come forth a Ruler
Who will shepherd My people Israel.’”
7 Then Herod secretly called the magi and determined from them the exact time the star appeared. 8 And he sent them to Bethlehem and said, “Go and search carefully for the Child; and when you have found Him, report to me, so that I too may come and worship Him.” 9 After hearing the king, they went their way; and the star, which they had seen in the east, went on before them until it came and stood over the place where the Child was. 10 When they saw the star, they rejoiced exceedingly with great joy. 11 After coming into the house they saw the Child with Mary His mother; and they fell to the ground and worshiped Him. Then, opening their treasures, they presented to Him gifts of gold, frankincense, and myrrh. 12 And having been warned by God in a dream not to return to Herod, the magi left for their own country by another way.

We often think of the magi as three kings from the Orient. However, we don’t know how many there were—only that there was more than one, and we don’t exactly where they came from—other than “from the east.” The magi were wise men, not royalty, and the most significant thing about them is that they were not Jews. God revealed the birth of the Messiah to foreigners, leading them to the Holy Child by a star. We observe the visit of the Wise Men at the end of the Twelve Days of Christmas, on the Epiphany of Our Lord. Epiphany means “manifestation”—when God manifested the Messiah to the Gentiles. We don’t have to be born Jews to be part of God’s chosen people. His Kingdom includes Jews and Gentiles, rich and poor, master and slave, men and women—everyone who accepts the gift of salvation offered through the baby the magi worshiped who grew up and died for our sins.

Thank You, Lord, that You have opened Your Kingdom to everyone who loves and worships You. We praise You for Your mercy, grace, and love. We worship You and glorify You. In the name of Jesus. Amen.