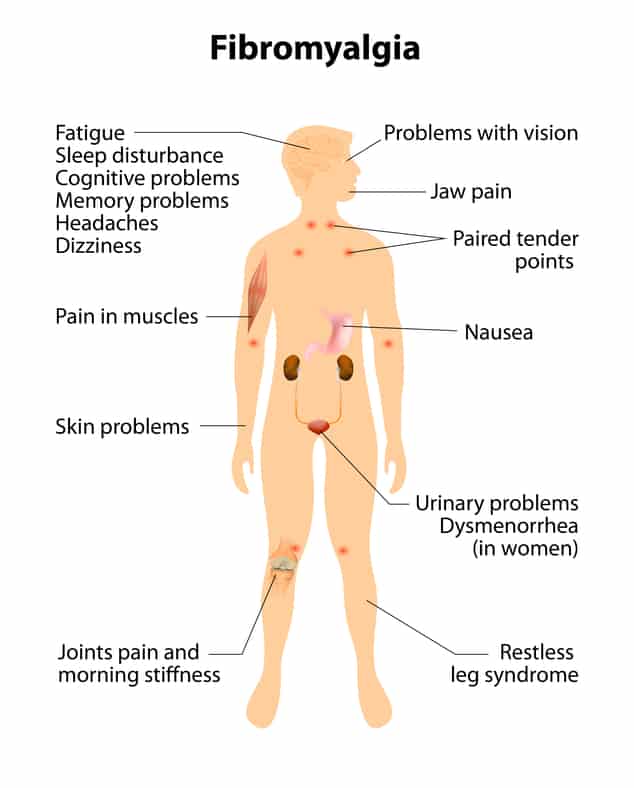 May 12th is Fibromyalgia Awareness Day.

As you can see from the graphic, fibromyalgia often has many symptoms beyond chronic pain and fatigue. When I was in my early to mid thirties, I had severe pain that none of the several doctors I saw recognized. Some even said it was “all in [my] head.”

Fibromyalgia was just coming into public awareness at the time, and when I read an article in a popular women’s magazine, I was convinced that fibromyalgia was the cause of my pain.

The article showed an image of a human body with eighteen points marked. Pain and tenderness in eleven of those “tender points” indicated fibromyalgia. Fifteen of the areas were painful to me.

I took the article to my family doctor and told him, “This is what I’ve been complaining about.” At the time, I had no idea that there would be other symptoms. I was often extremely fatigued, but I didn’t attribute it to the disease. After all, I lived a hectic life–running a business, rearing a son with my husband, caring for our home, and doing volunteer work.

Through the years, I’ve experienced many other symptoms in addition to the pain and fatigue. However, with the aid of medication and self-help treatments such as a therapy tub and plenty of rest, I can usually function well on a day-to-day basis.

People notice my walker, which I use primarily because of my poor balance as a result of a stroke, and my oxygen machine, but they don’t see the fibromyalgia symptoms.

If you know nothing or little about fibromyalgia, today is a good day to raise your awareness. If you know someone with the disease, recognize that they are truly suffering and not just complaining of imaginary symptoms.