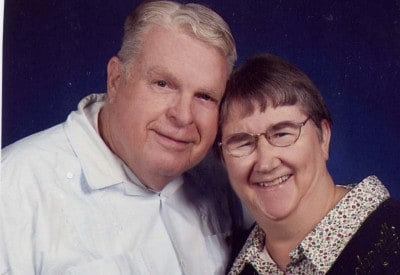 Jack and I met on my twentieth birthday, June 20, 1966, the day I started my summer job in the office where he worked at Kelly Air Force Base. His divorce was in progress but not yet final, so we didn’t have our first date until mid-August after he was officially divorced. In the meantime, he had driven my sister and me to and from work every day, and Jack and I had spent every coffee break and lunch hour together in the cafeteria.

We had one real date before it was time for me to return to school. After that date, he took me to his house (the house I still live in to this day) and, after a tour of the house, we sat side-by-side on the couch as I excitedly told him my future plans. When I stopped to take a breath, he looked at me and asked, “When are you going to marry me?” I said, “When are you going to ask me?” He asked, I said “yes,” and we planned to marry the following summer after I finished my last year of college.

My parents, especially my father, didn’t approve of our relationship. Jack was thirteen years older than me and divorced; in fact, my sister had told my parents I broke up his marriage. Of course, that wasn’t true, but you can imagine my parents’ reactions. On top of all that, Jack was a “city slicker,” unthinkable to my farmer father.

To keep my folks happy, Jack and I agreed to limit our visits and phone conversations. So for the first few months of the school year, our main communication was by mail. I know it will be hard for young people to imagine this, but we hand-wrote long letters to each other six days a week to ensure that we each had a letter every day mail was delivered. What a disappointment when a letter was delayed, and we faced an empty mailbox, but what joy the next day when we got two letters! Those first few months, we routinely wrote six to eight page letters, sharing our daily activities and saying how much we loved each other.

Later in the year, the letters were usually shorter as we saw each other almost every weekend and talked on the phone occasionally. Phone calls were limited because, hard it is to realize in today’s world, long-distance calls were expensive, and there were only two phones in my dorm for fifty or so girls to share. Sometimes Jack would call all evening and get busy signals constantly on both phones, or I would stand in line for an hour or two to get to the phone, only to reach the head of line at 10 PM curfew when the phones were cut off.

Jack and I both saved our letters, and two boxes—one of his letters to me and one of my letters to him—have sat on a shelf in my closet for 47 years. On the second anniversary of his death, I decided to re-read the letters for the first time in all those years. First I combined the two boxes, sorting the letters by postmark date, so I could read all the letters in order. Then I started reading, and I read for the better part of three days.

It was a bittersweet experience. The letters brought back wonderful memories of the early days of our love. Every letter expressed our eager anticipation of the day we could be married and be together “forever.” The tears came with the reminder that our “forever” is over, in this life, at least. We talked about feeling so incomplete when we were apart and so complete when we together, reminding me that I have been incomplete for two years.

At one point, we discussed the drowning death of one of my classmates. We were reminded then that one of us would die one day, and the other would be left behind, and we wondered how we would survive. I have survived the past two years, but the first year in particular was incredibly hard. Yet the joy we experienced for 46 years (45 years of marriage and that wonderful year of anticipation shared in the letters) is worth all the pain that came when it ended.

The picture I had made for our engagement announcement was in a cardboard frame that opened to stand, and I wrote a poem for Jack on the blank side of the frame. He wrote in his letters of carrying that picture from room to room as he went from the kitchen to the den to the bedroom every day so he could see my picture and read the poem wherever he was. Late in his life, he loved the picture of the two of us in this post. He had copies of it throughout the house—on his computer as a screensaver, on a calendar beside his computer, on the coffee table in the living room, on the wall by his chair in the den. Time never lessened our devotion to each other—in fact, our love always increased.

We said the same things over and over again in every letter, but occasionally one of us expressed our love in a slightly different way, and those are the comments that really struck me.

If I had only one wish come true in my life, it would be you.

I love you so much I can’t even figure out how much.

When we’re not face-to-face, we’re heart-to-heart.

There is simply no way I can tell you how much I love you, for I cannot understand the very depth of my own love for you. The depth and complexity of such perfect love is beyond human understanding and comprehension. My love for you reaches depths unknown to man and heights beyond even the wildest imagination. Its breadth is wider than the entire world and even more. There is no capacity to describe the vastness of love in simple words; it can only be described in action. Even action of any and every kind cannot adequately describe my love, for there is no action wonderful enough to describe this feeling.

No matter how long we’re married, it won’t be long enough.

No, 45 years wasn’t long enough. Yet I thank God every day for those 45 years and all the love that filled them.