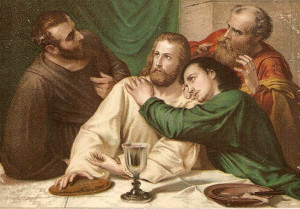 14 When the hour had come, He reclined at the table, and the apostles with Him. 15 And He said to them, “I have earnestly desired to eat this Passover with you before I suffer; 16 for I say to you, I shall never again eat it until it is fulfilled in the kingdom of God.” 17 And when He had taken a cup and given thanks, He said, “Take this and share it among yourselves; 18 for I say to you, I will not drink of the fruit of the vine from now on until the kingdom of God comes.” 19 And when He had taken some bread and given thanks, He broke it and gave it to them, saying, “This is My body which is given for you; do this in remembrance of Me.” 20 And in the same way He took the cup after they had eaten, saying, “This cup which is poured out for you is the new covenant in My blood. 21 But behold, the hand of the one betraying Me is with Mine on the table. 22 For indeed, the Son of Man is going as it has been determined; but woe to that man by whom He is betrayed!” 23 And they began to discuss among themselves which one of them it might be who was going to do this thing. ~ Luke 22:14-23 (NASB)

Lord, Jesus participated in the Passover meal, His Last Supper, with His disciples—even Judas, who betrayed Him. At that time, He instituted Holy Communion, telling His disciples to eat the bread (His Body) and drink the wine (His Blood) in remembrance of Him. As I partake of Communion each week, Father, help me to remember that it is not simply a long-standing ritual of the church, but a sacrament instituted by Christ Himself to bring us closer to Him, to symbolize our communion with Him, to remember His love and sacrifice. May those things happen every time I participate in the sacrament. In the name of Jesus Christ, my Lord and Savior, who lives and reigns with You and the Holy Ghost, now and forever. Amen.