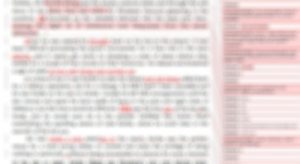 In a comment on a post about freelance rates, Chad asked, “Can you recommend an alternative to providing samples to prospective clients? Would a resume be a good substitute?”

In my reply to Chad’s comment, I explained why I think a sample edit is good for both the freelance editor and the potential client for several reasons.

Clarification added 3/1/11: Note that the sentence above says freelance editor. I thought it was obvious that I was talking about a professional editor providing a sample edit of a few pages of the client’s manuscript. Somehow, one commenter thought I was advocating sending the original draft and edits of a writing project to the client. That is not what I wrote, and that it not something I would recommend.

First, it’s how I determine how much to charge. All editing jobs are not created equal. Some writers are much better than others, and some writers require extensive editing. I never charge by the page or the word because the good writer overpays and the bad writer underpays (and I’m the one who doesn’t get the money I should!). I ask the prospective client to send me an excerpt from the manuscript for me to edit. The time I spend on the sample guides me in determining the time I estimate for the entire project. My quote includes the proviso that the price is based on the assumption that the entire manuscript is self-edited to the same degree as the sample. The fee will be adjusted if the excerpt submitted for the sample edit has been polished, but the rest of the manuscript submitted for editing is very rough.

Editing a sample also helps me to feel comfortable that I’m a good fit to the manuscript. I don’t edit erotica or stories with extreme levels of violence, and I simply am not familiar enough with the conventions of some genres to do them justice. I also have to find the story intriguing—it would be an injustice to edit something that I don’t completely believe in. There’s no better way to determine that I will enjoy editing the manuscript than actually doing it.

The sample also gives me an understanding of what the client wants—writers have different expectations. Some just want an editor to tell them their words are golden. It’s much better to spend a few minutes doing a sample and find out they don’t like your work than to take on the job and have an unhappy client.

Years ago, I was listed as a freelance editor on the website of the one of the “self-publishing” companies. Since then the companies all started offering in-house editing, but in the beginning, this company provided a list of approved editors rather than offering the service in-house. I never did any work for authors publishing with that company because they all wanted to do it their way. Now, having control over the finished product is one of the great benefits of self-publishing, but a serious writer will take advice from other professionals. I don’t expect clients to accept every suggestion I make, but I expect them to consider my ideas and use some, even most, of them. If the client is going to tell you it’s her story and she wants a spy being recruited in public at a random meeting in a bar and it doesn’t matter if that’s realistic or not because it’s fiction … I don’t want to edit that book.

A free sample also gives the prospective client a level of comfort that you can handle the job and that you will be easy to work with, always a good start to a working relationship. I am currently talking with a writer from another part of the world. He told me that he had quotes from two other editors that were considerably less than the price I quoted. However, I was the only editor who gave him a sample edit, and what he saw gave him confidence that the work would be done to his satisfaction. Although the other editors would charge less, he wasn’t confident that he would be happy with their work. In fact, they may do an excellent job, but he feels that he is taking a risk because he hasn’t seen anything to show him what he would get.

I always give a fair amount of detail on my suggestions in the sample edit, as you can see in the screen shot above of a few lines of an actual sample edit (blurred for privacy). Whether the writer agrees with my recommendations or not, he will understand my rationale. The writer can also tell me he doesn’t want me to change something—for example, I may point out that Chicago Manual of Style (usually used for books) calls for serial commas. However, if the writer says he prefers not to use serial commas, I will respect that and edit for no serial commas.

Most of us have common errors that we make repeatedly. Newer writers frequently haven’t discovered their common errors—possibly because they don’t even know what they are doing is wrong. For example, some of the writers I work with don’t know how to punctuate and paragraph dialogue, so every bit of dialogue in the manuscript has to be corrected. I point this out in the sample edit and often suggest that the writer make those corrections before submitting the manuscript to me for editing. That will cut down my editing time and their cost, and it will also help the writer hone his skill. Even if the writer ultimately chooses another editor, I hope that he learns something from the sample edit.

Of course, a sample edit isn’t appropriate for a very small project. But for a book-length manuscript from a first-time client, I insist on doing a sample edit—for my benefit and the benefit of the prospective client.