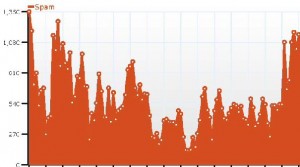 Is it just me or is it getting harder to separate legitimate comments from spam comments?

Often legitimate comments are easy to identify. They add relevant  insights, new information, or another opinion on the topic of the post, and they are posted under the commenter’s full name (or least a nickname). Sometimes they simply affirm the commenter’s agreement or encouragement to the blogger, but they clearly show the commenter is responding to a specific post. Occasionally, a few words that agree or encourage without specifically mentioning the topic are readily recognized as legitimate because the commenter is a regular reader who has left comments before.

Then there are the ones in the gray area.

The comment may be relevant to the topic but be posted by a keyword instead of a person. I always remind commenters that with KeywordLuv, they can use both their name and keywords. Then I can address them as a real person, and they still get their keyword link. I would much rather chat with John Smith from Dayton Used Cars than with Dayton Used Cars. I can’t help envisioning a used car typing the comment, and I can’t get excited about carrying on a conversation with a used car or insurance or a dentist or … whatever. Note: as of 8/31/09, I changed my comment policy and automatically mark as spam any comment left with keywords only and no name.

Other times the comment may be left by a commenter who uses a name but without responding directly the topic of the post.“Great post,” “I agree,” “Thanks for sharing,” and similar sentiments may be sincere, but they are also the kind of comments left by robots or by humans who haven’t taken the time to read the content of the post. If the person has commented before, I tend to give them the benefit of the doubt. However, comments of this nature from first-time commenters are treated as spam.

The spam comments that offend me the most are the ones that plagiarize as well as spam. These may be fairly easy to catch on recent posts but can slip through when left on old posts. My first experience with this was a single comment left on an old post. The comment added insight on the topic of the post, so I approved it. The next day, I had more than a dozen comments from the same “person.” The comments were posted immediately—comments are held for moderation only for the first comment. When I started responding to the comments, as I do to every comment, I recognized one of the comments as something I’d heard before. Reading the earlier comments revealed that the new comment was a repeat of a comment left months ago by someone else. That discovery led me to review every single comment left by this spammer, and every one proved to be copied from an earlier comment. I deleted all the comments and blacklisted the spammer, but that taught me to check more closely on comments on older posts.

Since then, I’ve found this happening frequently. Some are creative enough to take a sentence from each of three or four different comments so their comment isn’t identical to any other comment but is identical to parts of several different comments. Worse, some of the spam comments take material directly from the post itself. They have the nerve to leave me a comment composed of my words in the post they are commenting on!

The spam comments that puzzle me the most are the ones that are nothing but question marks, sometimes a few, sometimes hundreds. My only guess as to why anyone would do this is to get a comment past moderation with the expectation of lots more spamming with links included in future comments.

Other than spam, the only comments I don’t approve fall into one of two categories:

I love comments and encourage them with DoFollow, CommentLuv, KeywordLuv, and other plugins designed to make the commenting experience easy and fun and to reward them with links that help with SEO. I visit the site of every person who leaves a comment here and often subscribe to their blogs as well. I reply to every single comment, and I thank commenters monthly for being part of the community.

Too bad that spammers make moderating and responding to comments more of a challenge for me and all bloggers.

Are you finding it more difficult to sort out spam from legitimate comments?