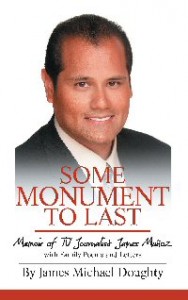 I’m putting the finishing touches on the formatting of Some Monument to Last: Memoir of TV Journalist James Muñoz with Family Poems and Letters. I’m tweaking some of the many color photos that had to be transformed to grayscale for print. The manuscript will be going to the printer soon.

In the meantime, author James Michael Doughty is offering an incentive for pre-orders. If you pre-order the print book, you can download a free e-book immediately. You don’t have to wait to read this compelling story, and you can see the photos in color. Then when the paperback edition is ready, you’ll receive a copy autographed by James.

People watch James on the local TV news and see his success. What most don’t know is the journey he has taken to achieve his dreams – the dream of being of TV journalist and the dream of finding his father’s family. Although he will never meet his father or his grandmother in person – not in this life, anyway, he has come to know them through his father’s letters and his grandmother’s poems.

Today James uses the name Muñoz (his mother’s maiden name) on the air to honor his maternal family and Hispanic heritage and the name Doughty (his surname) in private life to honor his father and his paternal family’s legacy. I’m sure both sides of James’ family are extremely proud of him. His own life experiences lead him to seek justice for those who don’t have power and give him empathy and understanding for the people involved in the news stories he covers.

James hopes to inspire and motivate young people, especially minority and disadvantaged youth. I believe his story will inspire anyone who reads it. I’m glad to be part of it.