Veterans’ Day in 1979 started badly and got worse. 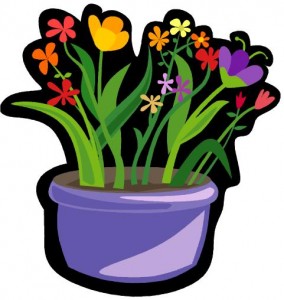 A partner and I owned a plant and pottery store in a small strip center. My partner created handmade pottery in her home studio, and I managed the store.

The day started with the sewer for the whole shopping center backing up in our toilet. As usual, I was alone in the store when I discovered the problem. I called the landlord for help, then I opened the back door, a few steps from the restroom, and started bailing water and dumping it out in the alley. A plumber sent by the landlord arrived, spent a few minutes assessing the situation, then left for more tools.

Instead of closing the store (a lesson for another What I Learned From …), I kept the store open and continued to make periodic trips to the back to bail water.

Shortly before noon, a man entered the shop. There were several restaurants in the center, and it wasn’t unusual for men to come in on their lunch hour. This man looked like a typical customer, though I noticed that he had his hands in his jacket pockets. However, it was a cold day (cold for south Texas anyway), so I didn’t think anything of it. I greeted the man and asked if I could help. “No, thanks,” he said. “Just looking.” As he was browsing, I went to the back to check on the plumbing disaster.

The man followed me to the back door. As soon as he determined I was alone, he pulled his right hand from his pocket. In his hand was a gun, which he pointed right at me. He demanded money, and I gave him the cash in the register and the receipts from the previous day (which hadn’t been deposited because it was a bank holiday). He then tied me to a shelf near the back of the shop, stuck the gun in my belly, and molested me. I was terrified and felt horribly violated but was blessed that what he did was relatively minor.

He left with the threat that if I reported the incident, he would come back and kill me and my whole family. I heard the front door open and close … but I couldn’t be sure he left because a small gazebo built into the center of the store blocked my view. I waited what seemed like an eternity but was probably only a few minutes, then I struggled free of my own cloth belt that he had used as a rope. I ran out of the shop into the store next door, and the shopowner called the police.

Later that day, I heard from another storeowner in the center that an employee in her second store had been robbed and assaulted about an hour before I was robbed. The robber matched the description of the man who robbed me.

My store was in a small suburb, and the other store was in a different small suburb several miles away. We soon learned that this robber was robbing and assaulting women in strip centers throughout the city. Each time, he left his victim tied up with her own pantyhose or other item of clothing. Each time, the assault was more serious. A couple of days later, the story took up half of the front page of the local newspaper with a lurid headline about a serial robber targeting women alone. Police predicted that if he wasn’t captured soon, assault might progress to murder.

Three different jurisdictions were investigating: the police departments in each of the small suburbs and the city police department. My husband Jack made contact with the detectives assigned to the cases in each department. He quickly learned that each jurisdiction wanted to be the one to capture the headline-making robber. Rather than sharing information, each was working as a lone ranger. So Jack took it up himself to be the coordinator between the departments. He gathered all the information each detective had, then he called the others and passed on the information.

No one had reported seeing the robber leave the scene, but several people reported vehicles leaving the various shopping center parking lots near the times of the robberies. Each department was looking for vehicles matching the descriptions reported to them; each had different descriptions of the cars seen leaving parking lots in their jurisdiction.

One report described a late-model gold sedan with dealer license plates. Jack passed this description on to the other two departments. The detective in the other suburban police department said, “I’m going out to catch that so-and-so [maybe not his exact words] today.” He drove through the community checking the parking lots of all the small strip centers. About noon, he saw a late-model gold sedan with Georgia license plates (the same color as Texas dealer plates) speeding out of a strip center parking lot. The policeman took off after the car and turned on his overhead lights to signal the driver to stop. Instead of stopping, the driver sped to the nearby freeway and headed north. Along the way, he passed through the city and the jurisdiction where my shop was located. Police cars from both departments joined the chase.

Finally, after many miles of high-speed chase, the driver pulled off the highway and into a service station. This was in the days of full-service gas stations, and an attendant walked out of the building toward the car. When a half dozen police cars with lights flashing and sirens blaring followed the gold sedan into the station, the attendant backed into the building.

Surrounded by police, the driver obeyed orders to get out of the car with his hands up. He surrendered without resistance.

The gun he had used in all the robberies was on the front seat beside him, and the police found a victim tied up in a store in the shopping center he had sped away from.

The rest of the story is for another day. This post is an entry in Middle Zone Musings’ group writing project What I Learned from the Law.

I learned many lessons from this experience – about dealing with a crisis in a retail store,  about being alert to danger, about overcoming trauma … and more.

Here is what I learned specifically from my contact with the law.

I hope you never have the opportunity to learn lessons from being a crime victim, but if you are ever a victim, I hope the lessons I’ve learned will be helpful to you.