Jack and I met when I got a summer job during college in the same office at Kelly Air Force Base where Jack worked as a civilian Industrial Engineer. I started that job on my twentieth birthday, and Jack followed the boss and me around when the boss introduced me to other employees. Jack teased me that the name plates would be removed from all the desks the next day and I would have to remember everyone’s name. It wasn’t particularly funny, but he laughed at his own joke so much that I had to laugh along with him.

A little more than two months later on a visit to Jack’s home a few days before my job ended, we sat on his couch as I told him my future plans. After I talked about returning to college, getting my degree, finding a job after graduation … he looked at me and said, “When are you going to marry me?”

I responded, “When are you going to ask me?”

He asked, and I accepted.

My father was worried that this older “city slicker” was out to take advantage of a naive, young country girl. The priest who gave us premarital counseling warned me I had to be prepared to take care of Jack in his old age since he’s thirteen years older than I am.

Daddy’s worries soon disappeared as he came to adore Jack. Daddy barely had a high school education back in the days of eleven-year schools, and he lived on the same farm from his birth to his death. Jack has a Master of Science degree in Systems Management Engineering and has always lived in the city of San Antonio. However, they were far more alike than it appeared on the surface – both highly intelligent, deeply caring men with great senses of humor. I think my mother recognized that right away. She liked Jack from the beginning and grew to love him as quickly as my father did.

And as for the priest’s warning that I would have to take care of Jack in his old age … I was the one who had a stroke after we’d been married for twenty-five years. Jack is the one who cared for me during the many months of my recovery and continues to take care of me as I experience recurring health issues. Though he has had medical challenges of his own in recent years, I’ve been far more dependent on him than vice-versa.

When Jack’s mother was alive, she used to tell me I deserved a gold star for putting up with him so long. He is impatient, often short-tempered, always opinionated. He could give a much longer list of my faults, but I’ll leave that to him. 🙂 On the other hand, he is trustworthy, dependable, generous, caring, smart, unselfish, and funny. We laugh – a lot! We love each other very much, and we both love the Lord.

Love, laughter, and faith have made forty years fly by. I wish you the same joy and blessings that we have experienced for forty years … and that we plan to experience for many more! 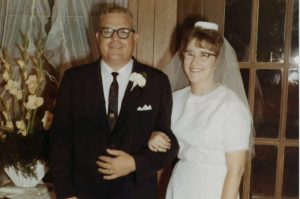 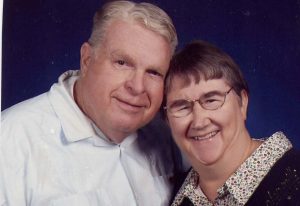