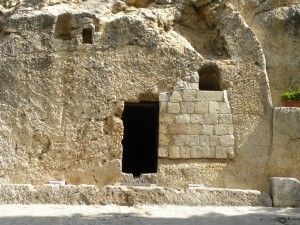 38 After these things Joseph of Arimathea, being a disciple of Jesus, but a secret one for fear of the Jews, asked Pilate that he might take away the body of Jesus; and Pilate granted permission. So he came and took away His body. 39 Nicodemus, who had first come to Him by night, also came, bringing a mixture of myrrh and aloes, about a hundred pounds weight. 40 So they took the body of Jesus and bound it in linen wrappings with the spices, as is the burial custom of the Jews. 41 Now in the place where He was crucified there was a garden, and in the garden a new tomb in which no one had yet been laid. 42 Therefore because of the Jewish day of preparation, since the tomb was nearby, they laid Jesus there. ~ John 19:38-42 (NASB)

Lord, today is the day that Jesus lay in the tomb all day. He had suffered by physical torture and even more by being separated from You as He carried all our sins on the cross. His disciples and His enemies were convinced that “It is finished,” which Jesus cried out on the cross, meant Jesus’ ministry had ended with his life. They were afraid and doubting, but they didn’t know that Sunday was coming. Praise You, I know Sunday is coming. I know that as sad as today is, the joy of tomorrow will be greater. Let me remember today Jesus’ sacrifice and free me from the bondage of sin. In Jesus’ name. Amen.