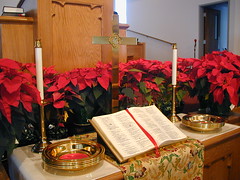 9 The true light, which enlightens everyone, was coming into the world. 10 He was in the world, and the world was made through him, yet the world did not know him. 11 He came to his own, and his own people did not receive him. 12 But to all who did receive him, who believed in his name, he gave the right to become children of God, 13 who were born, not of blood nor of the will of the flesh nor of the will of man, but of God.

14 And the Word became flesh and dwelt among us, and we have seen his glory, glory as of the only Son from the Father, full of grace and truth.

GOD, who makest us glad with the yearly remembrance of the birth of thine only Son Jesus Christ; Grant that as we joyfully receive him for our Redeemer, so we may with sure confidence behold him when he shall come to be our Judge, who liveth and reigneth with thee and the Holy Ghost, one God, world without end. Amen.

May God bless you and your loved ones as you worship Him in spirit and truth on this day in which we celebrate Jesus coming to earth for our salvation.