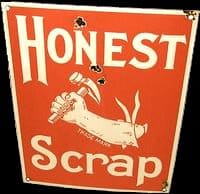 Jean Henry Mead of A Western Historical Happening awarded me the Honest Scrap Award for “telling it like it is.”

I’m a little confused about the meaning of honest scrap, but perhaps it refers to an honest “detached piece of something written or printed.” Recipients are supposed to tell ten honest (and interesting) things about themselves, so perhaps each thing is a scrap. I can come up ten honest things, but you’ll have to be the judge of whether they’re interesting.

Now I’m supposed to pass the award on to seven bloggers. Though my original list had more than seven names, I narrowed it down to meet the criteria of the award. I’m selecting people whose honesty and willingness to “tell it like it is” I respect. Not all of them will choose to respond. Being honest enough not to respond if they prefer not to will simply reinforce my recognition that they deserve the Honest Scrap Award.