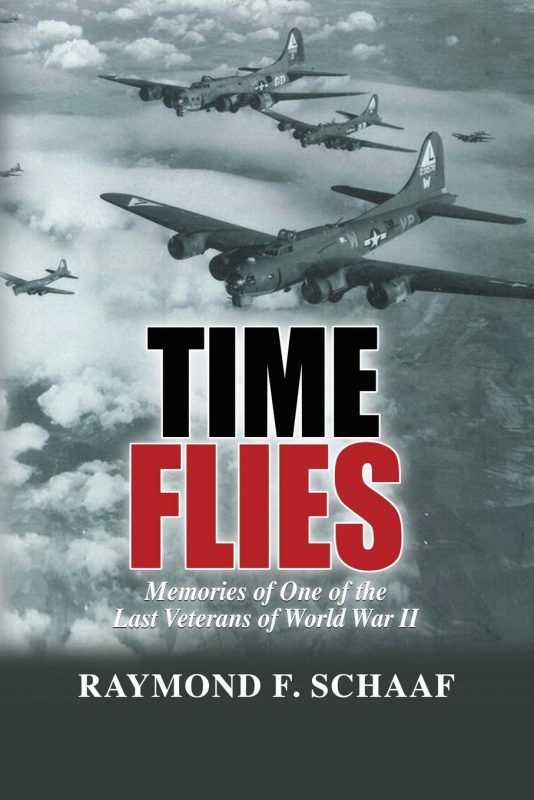 The World War II generation is dying off at the rate of about 487 a day nationwide. Only 80,000 are left of the 16,000,000 who were in service during World War II. Ray Schaaf is one of the last surviving WWII vets. In Time Flies, he shares his experiences as a boy growing up in a family of five in small-town Colorado before and during the Depression; a young man who eagerly joined the Army Air Corps to fight World War II; a gunner on thirty-five bombing missions; a husband and father of four; a civilian working a variety of jobs after the war before rejoining the military; a career officer in the Air Force, a fuels and missile expert for more than twenty-six years; a retiree enjoying hobbies, friends, and travels with his wife; a widower still enjoying friendship and travel. Time Flies is not only the story of Ray Schaaf; it is the story of many of our World War II heroes.

Order Now!
About the Book

Raymond F. Schaaf, the fifth child of Alvin and Edith Schaaf, was born April 24, 1925, in Animas City, now part of Durango, Colorado. He joined the Army Air Corps at the age of eighteen. He served in World War II from 1943 through 1945. He later returned to serve during the period of Korea and Vietnam. He was discharged from the US Air Force in 1970 as a lieutenant colonel after twenty-six and a half years of service. He lives in Round Rock, Texas.

Share
Facebook Twitter Google+
Preview
Disclosure of Material Connection: Some of the links in the page above are "affiliate links." This means if you click on the link and purchase the item, I will receive an affiliate commission. I am disclosing this in accordance with the Federal Trade Commission's 16 CFR, Part 255: "Guides Concerning the Use of Endorsements and Testimonials in Advertising."