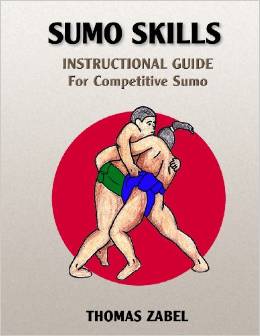 English language guide to sumo with illustrations of all techniques.

The first English-language training guide for Sumo wrestling! The Japanese cornered the market in producing the best athletes in the sport of amateur sumo until an American, Emmanuel Yarborough, won the GOLD in the open-weight division at the 4th World Sumo Championships in 1995. Since then, sumo is one of the fastest growing sports in the United States, Europe, Asia, South America, and around the world. A sumo match can be over in a fraction of a second. It’s amazingly explosive! The burst of energy and adrenaline makes sumo as physically and mentally intense as any sport can be. This instructional handbook gives you the basic fundamental skills to train and succeed in competitive amateur sumo. It begins with a short history, covers how to tie a mawashi, and goes on to detail the commands and responsibilities of the referee (gyoji) and judges (shinpan). This ultimate manual gives step-by-step examples of the most common techniques used by both amateur and professional sumo rikishi, and breaks down various training methods such as shiko, suriashi, butsukari, etc. so that anyone, with enough motivation, training, and preparation, can become proficient at sumo.