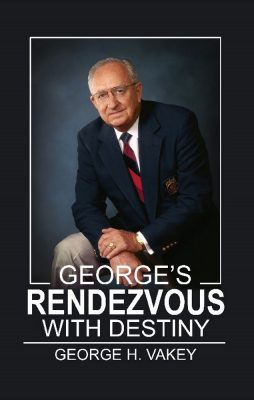 George H. Vakey spent three years, three months, and fifteen days in World War II, 165 days in combat. He returned from the war to spend his life as an educator.

In his ninety-plus years, George Vakey has experienced a life that most people can’t even imagine. George was motivated to share his story when a writer researching World War II interviewed him. He studied agriculture at Texas A&M until the attack on Pearl Harbor. Then he joined the Army and served four years in the infantry. Since he had been in ROTC throughout high school and college, he advanced quickly-from squad leader to platoon sergeant to first sergeant of the company. George spent three years, three months, and fifteen days in the Pacific as part of the famed Wolfhounds regiment; he participated in five campaigns, including 165 days “on the line” in battle in the Philippine mountains-the world record for days in combat during World War II. George’s memories of his war experiences include both the soldier’s battles and the young man’s escapades. After the war, he returned to college and earned a Bachelor of Arts degree, a Bachelor of Science in Social Studies, and a Master of School Administration. George worked as a private detective and a special agent for the Railway Express agency before entering the education field. He worked as a high school classroom teacher, counselor, dean of boys, and vice-principal and principal of a high school. He also held several management positions and directorships in the school district, ending his career as Associate Superintendent of Instruction K-12. He was also in the Psychology Department, San Antonio Junior College in the Night Division.