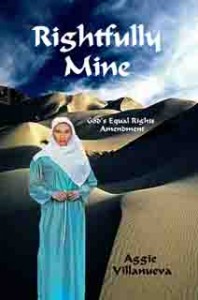 People sometimes think Judaism and Christianity are anti-women rights. Aggie Villanueva has written a compelling novel that shows this is not the case.

I enjoyed this story based on a few Old Testament verses in which sisters who had no male relatives were allowed to inherit the land due their father. We know that the Israelites had a male-oriented society, but this event shows that God cares about His female children as well as His male children and has from the beginning.

From the short account in Numbers describing the daughters of Zelophehad standing up for their rights, Aggie has created well-defined, believable characters and an entertaining story that makes the reader feel they are experiencing early Biblical times.

Readers who like Biblical fiction, those who are interested in women’s rights, and lovers of romance will all enjoy Rightfully Mine.

The book is available in paperback and electronic formats at the following Web sites:

Aggie has graciously offered an e-copy of her book to a lucky commenters. Just leave a relevant comment below and you’ll be entered in the drawing, which will be open until Friday, February 5th.

Be sure to return here on Friday, January 29th for an interview with Aggie. She talks about both her writing and her photographic art with passion, and I know you’ll enjoy the interview as much as I did.

Added 2/5/10: Congratulations to Ron, the winner of the drawing for an e-book of Rightfully Mine.

Disclosure: I received an electronic  copy of the book from the author. I have not accepted any compensation for this review and made no commitment to give a favorable review. The links to Amazon.com and Smashwords are affiliate links.