Recently, a client sent me a document to edit that was filled with spelling errors that should have been caught by spell check. I sent my client a note offering to help her new assistant turn on automatic spell checking.

A few days later, I was working on a new document for the same client. I typed a word and realized I had misspelled it … but there was no squiggly red line under the word. Was it right? No, it looked wrong, but Word said it was correct when I manually checked the spelling. So I looked the word up in the dictionary, and it was wrong. Maybe there something wrong for the listing of that word in Word’s dictionary. So I typed another misspelled word … and another … and another. Word said all were correct. I typed gibberish. Word said it was correct. I opened all the other Office programs and typed the same gibberish and spell check put squiggly red lines under every “word.”

Thus began a three-hour process of researching and experimenting to correct the problem. I read Word help and checked all the settings. I logged into the Microsoft forums and tried the numerous suggestions for spell check problems. I changed settings and edited the registry and rebooted the computer after each change. Word still told me my gibberish was correctly spelled.

Finally, I came across a message that sometimes a “bad” add-in can cause a problem with spell-check. So I decided to disable add-ins one at a time, then see if spell-check worked. When I opened Add-ins and looked at the drop down menu to manage add-ins, I saw a selection for Disabled Add-ins. I opened Disabled Add-ins and discovered spell check was disabled! Word said the add-in was disabled because it caused a serious problem the last time it was used. I don’t recall any “serious problems” with Word – and I’m not likely to forget “serious problems” – but whatever happened, the problem is solved!

Spell check can be easily misused and abused. I continually see words that are spelled correctly but are the wrong word for the context because the writer accepted Word’s spelling suggestion. However, I know much time it can save and how much it can improve accuracy if used correctly. 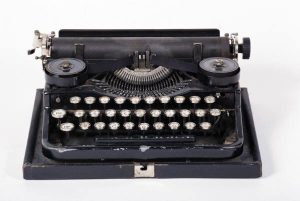 That thought led to the memory of the typewriter. There wouldn’t be nearly as many writers as there are today if we still used manual (or even electric) typewriters.

Several years ago, I transcribed my mother-in-law’s life story from tape recordings she made. I had helped my mother with her story (which I’ll talk about in a few months in a series on writing memoirs and family histories), and my husband and I had encouraged my mother-in-law to write her own life story. She finally agreed to talk into a recorder if I would transcribe the recordings.

After I typed the manuscript, we took it to her to edit, especially to be sure I spelled unfamiliar names and places correctly. She asked how I wanted her to mark the changes. When I told her to just mark the manuscript pages, she said, “Oh, I don’t want you to have to re-type the whole page for a small error!”

She had used the same manual typewriter since her college days in the 1920s. She had never used a computer and was amazed when I told her I could make the corrections on the computer and print out a new manuscript.

Jack picked her up and brought her to my office to spend the afternoon while I was making the corrections. Cut and paste amazed her. She kept saying, “I would have had to re-type the whole thing to move things around like that.”

That experience gave me a new appreciation for the computer and word processing. It also gave me a wonderful visit with my mother-in-law and lovely memories years after she is no longer with us.